Her room-mate is an Olympic gold medalist and her boyfriend is
a superstar. Now Bianca Walkden is a world champion herself 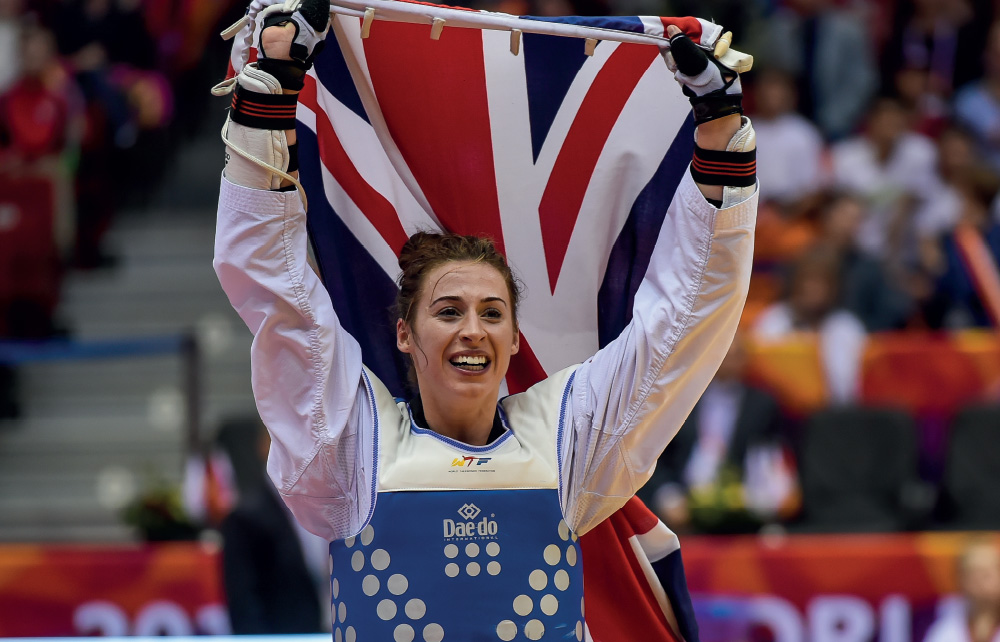 Talk about living in the moment. Great Britain’s Bianca Walkden, fifth-ranked in the world, was one point behind her opponent, a two-time world champion – and with just four seconds left on the clock, she was four seconds from defeat.
Fighting in the female +73kg category, at the 2015 World Taekwondo Championships, Walkden – known to her team as “Queen Bee,” a play on her abbreviated name – was facing off against French powerhouse Gwladys Epangue.
In Round 1, the taller Briton had started fast, firing jackhammer side kicks: her stockier opponent had kept her distance and stalked from the center of the ring. There was a brief flurry of venomous kicks, but neither found the range, with the French girl daring Walkden to score by opening her arms. The round ended 0-0. A lackluster Round 2 also ended with the scoreboard empty.
Round 3, however, brimmed with drama. Epangue connected with a turning kick to the body, giving her a one-point lead. She maintained that until, with just 22 seconds remaining, she slipped to the mats as the British girl scored to the head. Three points appeared on the board – but were disallowed. Moreover, Walkden lost a penalty point, putting her down, 2-0. But Walkden was unfazed. “I did not even think about it,” she said. “I was in the zone.”
With 10 seconds remaining, the French girl fell again – her second fall, granting Walkden a point. When play recommenced, there were just four seconds left on the clock, meaning Walkden had to open fire with all weapons. An earlier moment in the match had given her the sense that she should be sniping for the shorter French girl’s head. “I was looking for the head – it was that or the back kick – as I had tried to get her early, and had nearly got her,” she said.
From in close, Walkden hefted her leg up for an ax kick …
With head kicks and spin kicks offering maximum points, it is feasible in taekwondo – and it happened again and again in Chelyabinsk – to fire a 3-point high-level, high-risk technique and take the match from behind, in the closing seconds. Was this Walkden’s strategy? “It was not planned, you get taught never to give up,” Walkden said. “It does not matter how long is left, you don’t stop to the end.”
… and her chopping foot flashed down onto Epangue’s head guard.
The points rang up: 4-2. Even so, the Queen Bee was primed to sting again. “As soon I saw the score, I thought, ‘Don’t let her score, don’t let her in, don’t let her attack,’” she recalled.
The timer registered 00:00. In the stands, the British team erupted in roars, cheers and air punches. Epangue looked disbelieving – as did Walken, who fully focused, who had not realized it was over. 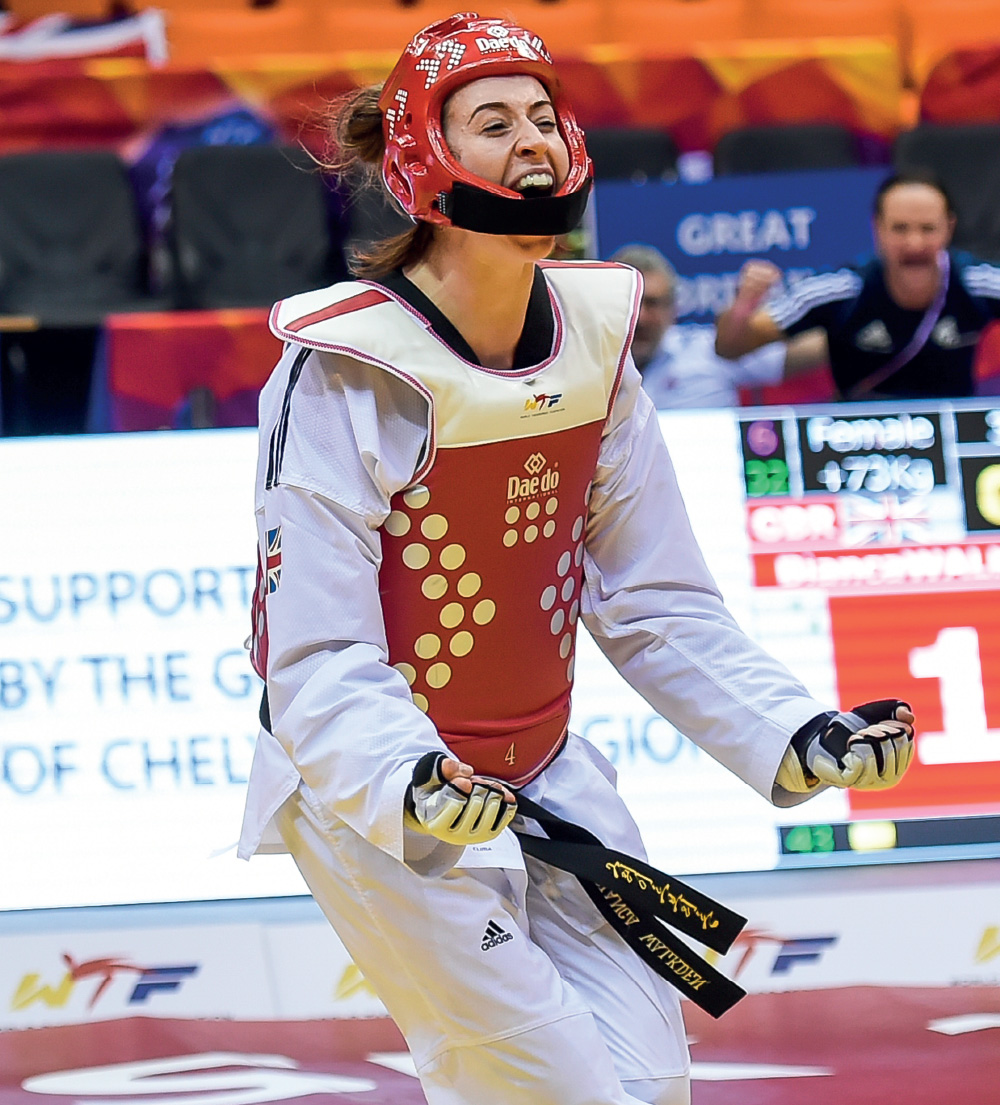 “I was ready to fight,” she recalled. “Then I turned round and I was world champion!”
Walkden has no hard feelings for her opponent. “She is a legend, she is a really lovely girl, she is an inspiration for everyone, she is a credit to the sport,” she said. And apparently, Epangue has no hard feelings against Walkden. “She is fine,” Walkden said. “She knows what it is all about. It [competitive taekwondo] is a random thing, it can change in seconds.”
The victory was particularly sweet as Walkden had just come out of rehab from knee surgery. “It has been really intense, my body has gone through so much trauma,” she said. “It has only been getting easier after the end of March when I started training, I was not fully fit yet and most people would not even be running – but I’ve won a world championship!”
“What she has done is truly inspirational, coming back from injury,” said Gary Hall, performance director for GB Taekwondo. “The medical team, the coaching team and the physical conditioning team never gave up on the hope of world championship success for Bianca, even in the darkest moments.”
Walkden expected to be back on full form for the Autumn season. She competed at the European Championships in Baku, Azerbaijan, and attended all the 2015 Grand Prix events. “I’d go even if I was world number one,” she said. “I love fighting!”
The 23-year-old hails from Liverpool but lives in Manchester, the “Mecca” of British taekwondo. A 12-year veteran of the combat sport, Walkden is a full-time athlete, paid for by UK Sport. And she has that spark of star quality.
On paper she is a heavyweight, but in person she is tall, slim and good looking, with a soft Liverpool accent. Her best friend and Manchester room-mate is Olympic gold medalist Jade Jones – “We have lived together for years, we thought we would be together for a long time, so we thought we should be mates!’ – who Walkden surely deserves to join as one of the sport’s most famous female faces.
Oddly, no commercial sponsors have yet stepped forward, though her new world-champion status might change that.
“I have not got any sponsors, so I am looking for an agent to try and get my face out there before Rio,” she said. “Taekwondo is not a massive sport but if I go home and get an agency I will let them do it [find sponsors] while I achieve the dream: To win the Olympics as many times as I can, not just once!”
One sponsor that would be a good fit could be BMW. Like the German car, the British girl is sleekly engineered with a powerful engine, but there is another reason: “I am Bianca Michaela Walkden, so we have the same initials!” she laughed.
When it comes to taekwondo’s public profile, she has some advice for the sport’s administrators. One issue is that – encased in head gear, body protector and dobok – the sport’s attractive young athletes all look pretty well indistinguishable, nixing both individuality and sex appeal.
“The suit is very respectful, there is a Korean tradition with it, but if you bought it in a little tighter, with leggings, maybe more men would watch the girls,” she said. “You never know!”
Walkden is currently focused on Olympic qualification; in the future she would like to open a gym and coach taekwondo.
And the sport is not just Walkden’s career and passion, it has also supplied her with romance: She and superstar Aaron Cook have been an item since the two were 16. But with Cook having departed Team GB and fighting for Moldova, who would she cheer for if her beau was fighting fellow teammate Damon Sansum?
“I will support Aaron if he fights GB,” she said. “But I will support GB all the way, I really like Damon.”
So could there be wedding bells ahead – or perhaps even a taekwondo super child springing from a possible Cook-Walkden union? On this question, Walkden was coy. “That’s the future, isn’t it?” she said. “You have to live for the moment.”

For an athlete who stole a world championship just four seconds from defeat, that’s a maxim to live by.