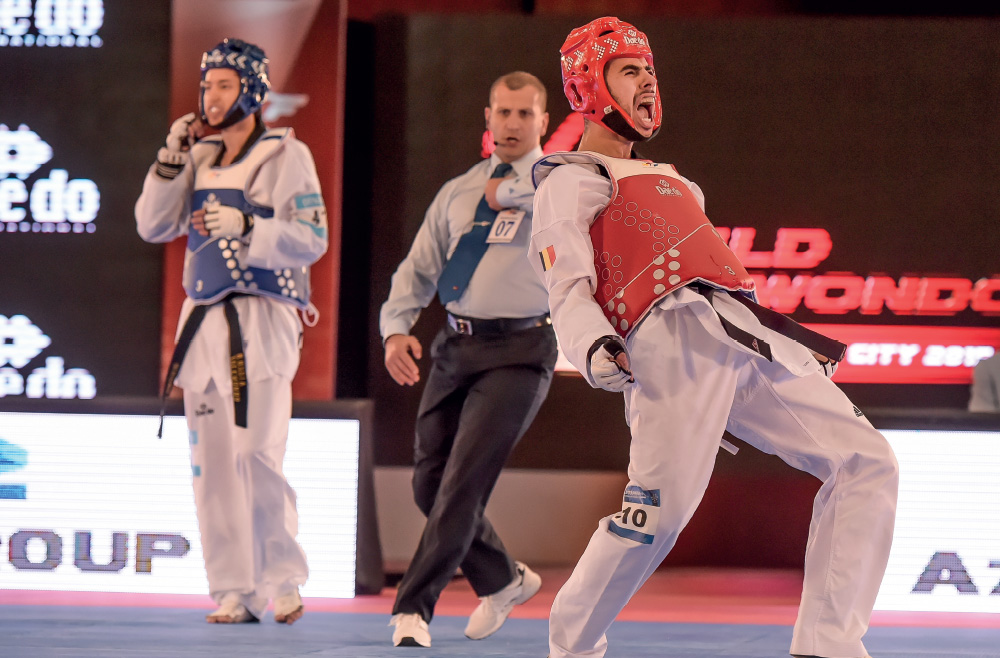 Jamilla Chellat must be a proud woman. As a youngster in Morocco, she had seen taekwondo being practiced, but had been too poor to take it up herself. Embittered, she vowed that, after she married, her children would be given the opportunity that she had never had: to excel in the sport.
Fast forward over two decades and two continents and so it has proven- and then some.
Her son, Jaouad Achab, is now the world-ranked number one in the ultra-competitive men’s -68kg category and one of the favorites to grab Olympic gold for his adopted nation of Belgium in Rio in 2016.
The junior Achab’s taekwondo journey started at the tender – very tender – age of 3. As per her earlier vow, his mother had put his older brother and sister into taekwondo classes. When they came home, their tiny brother would insist on kicking and sparring with them.
Seeing his unusual attachment to the sport, his mother took him along to the club. The coach said he was too little to begin, but his mother pleaded with him to let this child with the “unnatural talent” give it a go. The coach finally relented, but said it would be for just one session. That session dragged into two, then three. “People saw something special in me,” Achab said, looking back.
By the age of 6, Achab was fighting in and winning competitions – first for his club, and then for his city on the Moroccan national circuit. At the age of 13, he won the national cadet championship. However, for what he calls “political reasons” of the local federation, he did not make it onto the national squad.
In 2009, Achab’s family decided to emigrate to Belgium for a better future for them all – and for more taekwondo opportunities for their wunderkind son. He started fighting immediately upon arrival on both the Belgian and European circuits. “I had some wins, some losses, as I had not had any international experience,“ he recalls. “But little by little, I understood international-level competition.”
In 2011, he won the Belgium Open, his “first big competition” in Europe. Spotting the immigrant’s talent, in 2012, the Flemish Taekwondo Federation asked him to travel from his home in Brussels and train in Antwerp twice a week as a sparring partner for their top players. “I knew that it was a very good team, with a very good trainer, Karim Dighou, and a very good performance director, Laurence Rase,” he said. “For them, I was a sparring partner so I accepted their offer in order to better myself, but I wanted to be a champion.”
Before long, he was travelling to Antwerp – at the Flemish Federation’s expense – on most days and started winning G1 and G2 tournaments. But lacking Belgian nationality, he could not fight in the Europeans or in the Worlds. That changed in 2013. “I became Belgian that year,” he said. “It was an amazing day: I was crying and everything. It was a big door for a better future.”
He fought in the 2013 World Championships, winning two matches. In 2014, he became European champion. “That was my first dream to achieve,” he said. “After that another door opened: After the Europeans, I became a professional athlete with BLOSO, the Flemish governmental sport organization, which supported me a lot. From then on, I have got a lot of results.”
At the 2015 World Championships in Chelyabinsk, Russia, he found himself facing off against Mexico’s Joel Gonzalez, a two-time world champ, in the finals. “I had to have full concentration; if I’d lost it for one second he could go very fast to my head,” Achab recalls. “I controlled the fight for the first round, and the second round, I worked harder and it was 2-0 to me, then in the third he went to the head but at that moment I seized the advantage and scored to his head! It was 5-2 and I had to control the fight to the end – every second was important. I controlled it to the finish.”
The result was a world championship title.
“It was the most important competition of my life and the biggest day of my life,” he said, classing that – along with the European Championships and the World Universiade, which he also won in 2015 – as his top competitive achievements.
As a fighter, Achab blends old school with new school taekwondo. “I do the push kick at the moment I need it. I had old style, but I make it good with the Daedo style,” he said. “But I like spinning kicks, the head kicks and the leg control: I have good control of the legs so I can kick again and again without putting the foot down.”
Like many of the most crowd-pleasing fighters in taekwondo – Servet Tazegul, Aaron Cook, Levent Tuncat – he is critical of the current state of the game, which strongly favors the front-leg pushing kick. 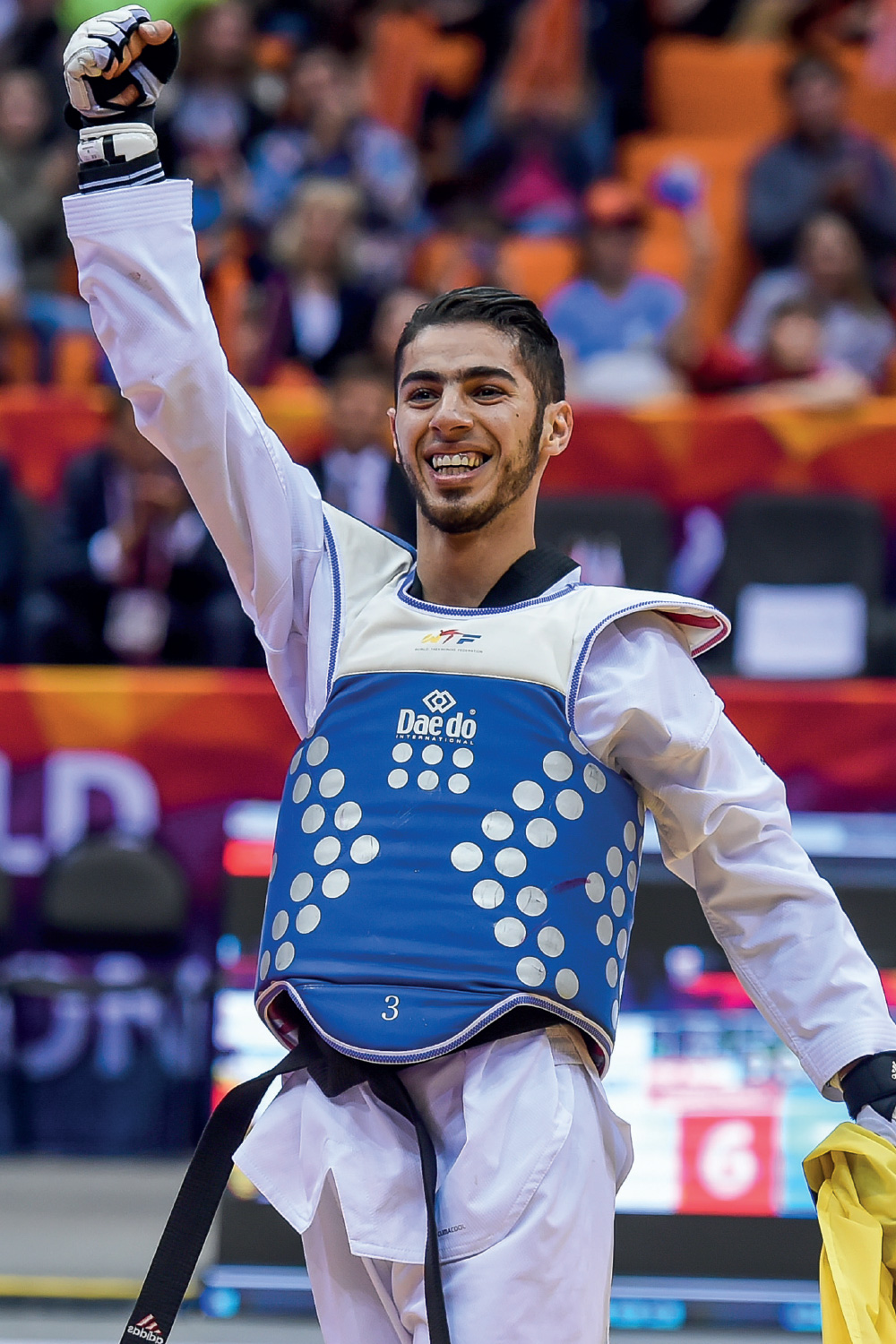 “I like Daedo, but there is something they must change because at the moment people do not watch a lot of taekwondo, the style now is not very spectacular,” he said. “You have sensors on the bottom of the foot and when you push you get points, so people don’t stop pushing, pushing, pushing. Taekwondo is much more beautiful than pushing.”
To overcome this, he suggests removing the sensor from the sole of the foot-sock, and toning down the power required to score points on the PSS. “Then, you would see beautiful kicks – people would kick with more spinning and double kicks,” he said.
With Rio 2016 fast approaching, Achab is in a good space. “Mathematically, I am qualified for the Olympics,” he said. “In all the GPs I will fight as normal and do my best to take gold – without pressure.”
Earlier in 2015, however – prior to Achab’s victories at the Worlds and at the Universiade – things had been different. “Early this year, I had a lot of pressure, I was not in the top six, I asked myself, ‘How can I do this? To be in the top six?’” he recalled. “When I slept I was dreaming of competitions – I had to talk to a psychologist.”
A student of physiotherapy, he is cutting back on his classes in order to concentrate on the Olympics, but will return to full-time study after the Rio smoke has cleared. Though 2016 will certainly not be the end of his competitive career; Achab plans on competing in Tokyo 2020.
Outside the dojang, he likes to swim, play snooker and shop for clothes. He also reads a lot; the book he is currently working through is on achieving one’s goals and appreciating whatever one has. Looking beyond his competitive career, he expects to be a physiotherapist and coach taekwondo.
Although firmly in the Belgian camp following his award of citizenship, he is gratified when he hears that many sports fans in Morocco are wondering why he did not make the Moroccan national squad years previously, and are now urging his return.
Having made a personal and family odyssey from Morocco to Belgium in order to achieve success in taekwondo; having learned three new languages – French, Dutch and English – in the process; Achab now looks set to scale the pinnacle of the sport. His mother’s ambition was one contributing factor in his success. His “unnatural” precocious talent was another. To what other factors does this young man attribute his success so far?
“I am someone who always thinks positively,” he said. “Physically, people say I am small for the -68kg category, but mentally, my mum says I have the heart and mind of a heavyweight.”