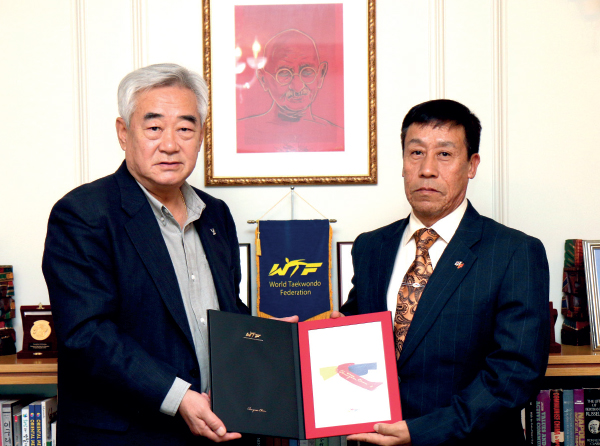 In the wake of the devastating earthquakes of 2015, Nepal is leveraging taekwondo as it rises from the rubble of calamity.

In spring 2015, Nepal was rocked by one of the most catastrophic earthquakes in recent history.

The mountainous nation shook from 300 aftershocks. Much housing and infrastructure was reduced to ruins. Over 9,000 Nepalese lay dead. Many, traumatized, remain in despair.
“This earthquake was a very devastating moment for us,” said Deep Raj Gurung, 58. “People are suffering badly, living in camps and homeless; the government is trying to help, but they are big numbers.”

Yet, amid this landscape of destruction, hope is rising. One sign of Nepalese resurgence is the country’s new national taekwondo training center.

Gurung, an 8th dan black belt with 36 years of experience in taekwondo, is the secretary general of the Nepalese Taekwondo Association, which will be responsible for the new center. It will open in two phases. The first phase will open in the latter half of 2016; the second phase will be complete in April 2017.

The decision to create the center was made two years before the earthquake struck and naturally, that impacted the construction plan. The center was downgraded from eight stories to three stories. Even so, the center will encompass two fields of play; seating for 1,000 spectators; a training hall; and office facilities. A neighboring building is to house a cafe, boarding facilities, and a gymnasium.

But the center represents physical infrastructure. Gurung– whose own family reside largely on the ground floor of their home, fearing to sleep upstairs – is more concerned with the degraded health of the Nepalese population. The earthquake has left countless physical and mental casualties in its wake, he noted. “They need rehabilitation programs,” he said.
This is where the WTF comes in.

During Gurung’s visit to the WTF headquarters on October 27, 2015, WTF President Chungwon Choue said that the WTF will dispatch help to Nepal.

The federation’s Nepalese activities are designed to act as a pilot program teaching taekwondo and related skills to refugees and displaced persons.
“If a humanitarian group goes and teaches taekwondo, it will be very good for moral support,” said Gurung, whose Nepalese instructors will work alongside the humanitarian team.

Beyond that, the Nepalese Taekwondo Association is planning an iconic event to prove that their national spirit has not been broken.

“Nepal is a mountainous country and we want to hold a symbolic event,” Gurung said. “This will symbolize that taekwondo people are strong and disciplined, with stamina, strength and power.”

The event, a poomsae championship, will take place on the slopes of Mount Annapurna.
Competitors, in partnership with invited Alpine athletes from around the world, will trek up to the site. There, the championship will take place against one of the world’s most awesome backdrops: the mighty sweep of the Himalayas.

In addition to symbolizing the Nepalese spirit, the “Adventure Taekwondo Championships” will send a positive message to the world, Gurung said: “That Nepal is a good destination for tourism and sport.”

The championship will also provide an effective showcase for taekwondo at a time when the country is planning to designate a national sport.
In 2014, taekwondo was added to primary and secondary educational curricula as an optional subject. Parliament has now shortlisted three sports – taekwondo, cricket and volleyball – as a potential national sport. A decision is anticipated at some time in 2016.
Sport can be an effective vehicle for disaster recovery and rehabilitation as Nepal seeks to overcome the traumas of the earthquake.

“Sport offers many things,” Gurung said. “It gives us unity, it gives us discipline and passion and relations with other countries.”

Naturally, Gurung and his association are doing all they can to make sure that the sport chosen is taekwondo.

“Taekwondo is a well-disciplined sport, it’s an individual sport, it’s a way of life,” said Gurung. “It is educational also. That is why we hope to do this.”