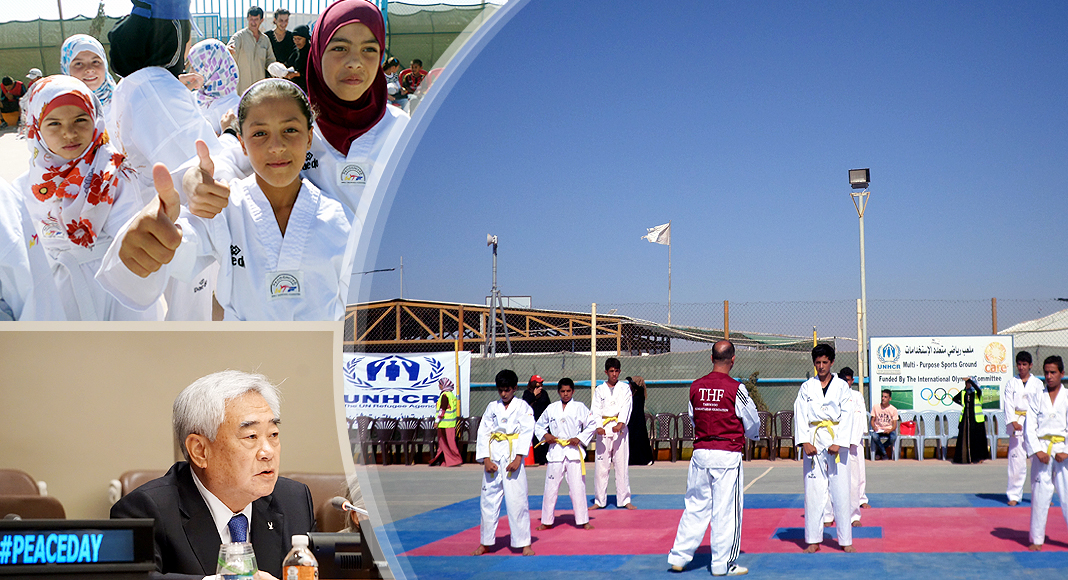 (September 21, 2016) – The World Taekwondo Federation today celebrated the U.N. International Day of Peace and reiterated the important role that taekwondo can play in promoting peace around the world.

Last year, on the International Day of Peace, WTF President Chungwon Choue announced the launch of the Taekwondo Humanitarian Foundation (THF) in his address at the United Nations headquarters in New York. The THF was launched with the purpose of harnessing the power of taekwondo to promote physical fitness, respect and understanding in refugee camps worldwide.

Over the last year, the THF has discharged teams of taekwondo instructors to teach the sport to young people in refugee camps in Jordan, Nepal and Turkey and studies are being carried out to launch THF projects in other nations around the world. Already, through the THF, the WTF has seen how taekwondo can inspire hope among those most in need and instill in them the core taekwondo philosophy and values of Olympism.

“The U.N. International Day of Peace is a very important day as it reminds us of what truly matters. It is a day which is very close to my heart as my father played a key role in founding the first International Day of Peace in 1981. Growing up, he taught me what a vital role sport can have in creating a more peaceful world. At the WTF we are committed to fulfilling our social responsibility and maximizing the potential of taekwondo to contribute to a more respectful and harmonious society.

“Taekwondo is the sport which can be practiced by anyone, anywhere in the world. It doesn’t matter how old you are, what gender you are, what religion you believe in or where you come from; taekwondo is a sport for all. That is why last year on the International Day of Peace we announced the launch of the Taekwondo Humanitarian Foundation. The THF is now operating successful projects in three countries and we are looking to expand this even further. We know that there is a lot more work to do but already we are seeing the positive impact taekwondo is having in refugee camps around the world.”