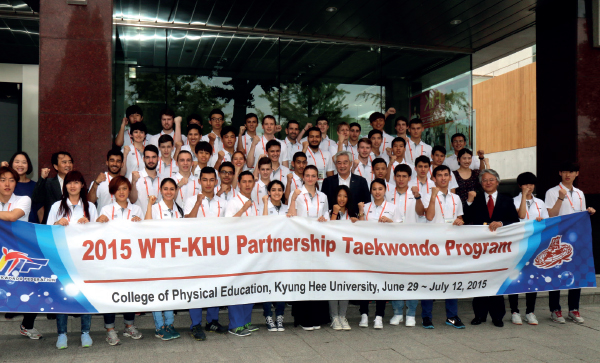 In a Seoul conference, WTF President Chungwon Choue laid out the taekwondo body’s latest humanitarian initiative in a presentation lauded by a senior executive of the UN High Commissioner for Refugees (UNHCR).

Under the theme of “Sport for a Better World,” the International Sport Cooperation Center of Korea (ISC) and the World Taekwondo Federation (WTF) jointly sponsored a conference held in Seoul’s Plaza Hotel on Oct. 26, 2015.
The event attracted figures from the fields of sport and development, including the WTF’s Choue, UNHCR Korea Representative Dirk Hebecker and Olympafrica International Foundation CEO Thierno Alassane Diack.
After opening remarks by ISC President Lee Eun-chul, WTF President Choue took to the rostrum to deliver the keynote.
He first discussed the WTF’s wide experience, global outreach and its previous humanitarian body, the World Taekwondo Peace Corps Foundation. He then introduced the Taekwondo Humanitarian Foundation (THF), adding further details about the initiative, which he had first revealed publically in a speech to the UN in New York on Sept. 21, 2015.
The nascent foundation is being established in Lausanne, Switzerland, and will begin operations in 2016. Fundraising has already started, with WTF staffers and officials donating seed money. The WTF is designed to dispatch instructors to refugee camps worldwide to teach taekwondo, Olympism and related values.
“As a sport, taekwondo will improve the quality of their physical and mental lives, and as an art, it will nourish their spirits.” Choue said. He characterized taekwondo as, “a gift that, once given, can never be taken away. It can be practiced anytime, anywhere, by anybody.”
He moved onto timing. “We are wasting no time,” Choue said. “A WTF official based in Saudi Arabia has already carried out a reconnaissance at a Syrian refugee camp in Jordan.” Pilot programs are planned for that camp, and for a displaced persons’ camp in earthquake-hit Nepal.
“Thanks to the WTF’s extensive international networks; thanks to our extensive experience; and thanks to the deployability of our sport, we are ‘Good to Go,’” Choue declared.
The UNHCR’s Hebecker, the second speaker, noted that there are now 60 million refugees worldwide – the highest number recorded since World War II. He went on to discuss the work of the commission.
Although the UNHCR has a budget of around US$7 billion, he conceded, “Sport is often the last thing for which funding is made available.” Even so, he noted that sport, “… gives a new motivation to survive and gives hope and creates a sense of normalcy,” as well as giving refugees physical exercise, a sense of direction, team spirit and human dignity. But only 10 percent of refugees have access to sports, he estimated.
After showing a film clip of the UNHCR’s “9 Million” campaign, he said, “We have not been able to come up with a new campaign – maybe taekwondo can be the new campaign.” He continued, “With very simple initiatives we can change the lives of many refugee children.” Referring to Choue’s earlier presentation, he said, “Taekwondo is so easy to undertake, it is a ‘new brotherhood’ of spreading hope to refugees.”