(July 21, 2016) – In this category, it is feasible to categorize the athletes into three broad categories: height; experience; and speed.

China’s towering Shuyin Zheng won top ranking in the category after winning gold at the 2015 Grand Prix Final in Mexico City. Zheng’s game has been improving by leaps and bounds. At the 2013 World Taekwondo Championships in Puebla, Mexico, she looked slow and showcased only simple techniques. In the first Grand Prix of 2014 in Suzhou she won gold – but pundits saw this as being down to her height and her long legs. But the results kept coming. In the 2014 Grand Prix Final in Queretaro, she got bronze and at the 2015 World Taekwondo Championships in Chelyabinsk, she won silver. She beat Team GB’s Bianca Walkden in the Manchester Grand Prix Series 3 on golden point, emoting after her victory. In the 2015 Grand Prix Final, in Mexico City she beat Walkden, Dutch fighter Reshimie Oogink and Mexico’s Beijing 2008 Olympic gold medalist Maria Espinoza. Today, she is a far more dangerous-looking fighter than the gawky athlete of 2013. She no longer relies only on front-leg attacks, but has diversified her arsenal, wielding a spin back kick to the torso and an ax kick to the head with equal authority. Her mix of recent victories, height advantage and expanded arsenal makes her a formidable contender in Rio.

The number two in the category, and almost as tall Zheng, is Walkden, one of the highest profile fighters on the circuit. Nicknamed “Queen Bee” by her team mates, the leonine Liverpudlian is engaged in taekwondo’s most famous romance with Moldovan (and ex-GB) superstar Aaron Cook. Walkden won a bronze in the Grand Prix Series 1 in Suzhou in 2014, but was plagued by injuries and underwent multiple surgeries. However, she has strong backing from GB Taekwondo and is a growing star alongside her famed housemate, 2012 London Olympic gold medalist Jade Jones. In 2015, Walkden had a good season. At the World Taekwondo Championships in Chelyabinsk, barely recovered from injury, she came back from behind to defeat French veteran Gwladys Epangue in the dying seconds of the match with an arcing kick to the head.  In the Grand Prix Series 1 in Moscow she took bronze; in Series 2, in Samsun, she took silver; in Series 3 in Manchester she won another silver. But she has lost three out of four fights to China’s Zheng, which means she needs a solid game plan for Rio. 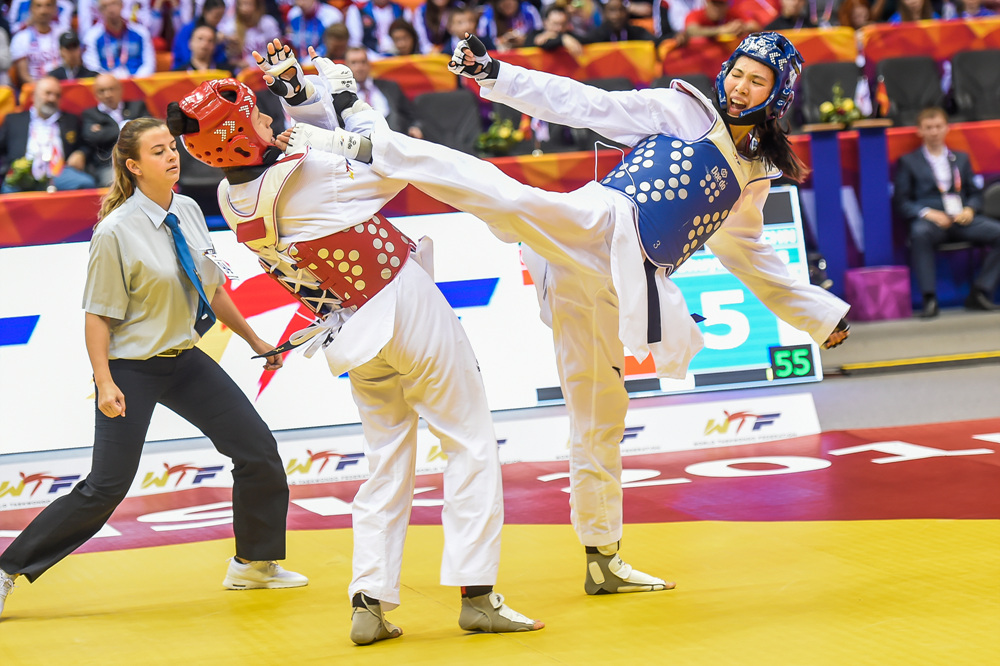 The second group of fighters in this category is shorter and older, but highly experienced: Mexico’s Espinoza and France’s Epangue. Both these fighters started training before the PSS (the electronic protector and scoring system which has revolutionized the game) was introduced, so have a strong base in the more power-based “old school” taekwondo.

After winning gold at the Beijing Olympics in 2008, Espinoza won bronze in London in 2012, making Rio her third Olympic appearance. But in recent years, although she dominates the Pan-American circuit, her success in wider international competition has been more limited, her main wins being silvers on home turf at the Grand Prix Finals of 2014 and 2015, in Queretaro and Mexico City, respectively. A feisty and fiery athlete, Espinoza boasts an excellent spinning back kick and one of the best punches in the sport, but is at a disadvantage against tall, leggy players; she has fought and lost three times against Zheng. In the run-up to Rio, she needs to upgrade her footwork if she is to land her close-range techniques on the taller fighters.

Epangue has one of the most formidable physiques in female taekwondo but did not make an appearance in London 2012 due to a spinal disease. However, after recovery, she has regained her prominence on the circuit with a wealth of experience. She won her first World Taekwondo Championships gold in Cophenhagen in 2009; her second in Gyeongju in 2011; and a silver at Chelyabinsk in 2015. Older than most of her fellow competitors, she is hugely respected by her fellow competitors – Walkden calls her “a legend” – tactically sound and a master of close-range combat. Having missed London, she must be particularly keen to make her Olympic mark in Rio.

The fastest fighters in the category are Serbia’s Milica “Comi” Mandic, the Netherlands’ Reshimie Oogink and Team USA’s Jackie Galloway.

Despite having won gold in London in 2012, Mandic has kept grounded: She is of the friendliest and most popular athletes in the sport. She won gold at the Manchester Grand Prix Series 3 in 2014, but suffered a slump in 2015 – a particularly grueling year, with four Grand Prix, the World Taekwondo Championships and Rio overshadowing all – only recovering her form near the end of the season, when she took home a bronze from the Grand Prix Series 3 in Manchester.

Given that this is the heaviest of the female Olympic categories, there are significant disparities in size and height, and both these factors affect technique. All this suggests that the female +67kg will be one of the most interesting divisions to watch in Rio.