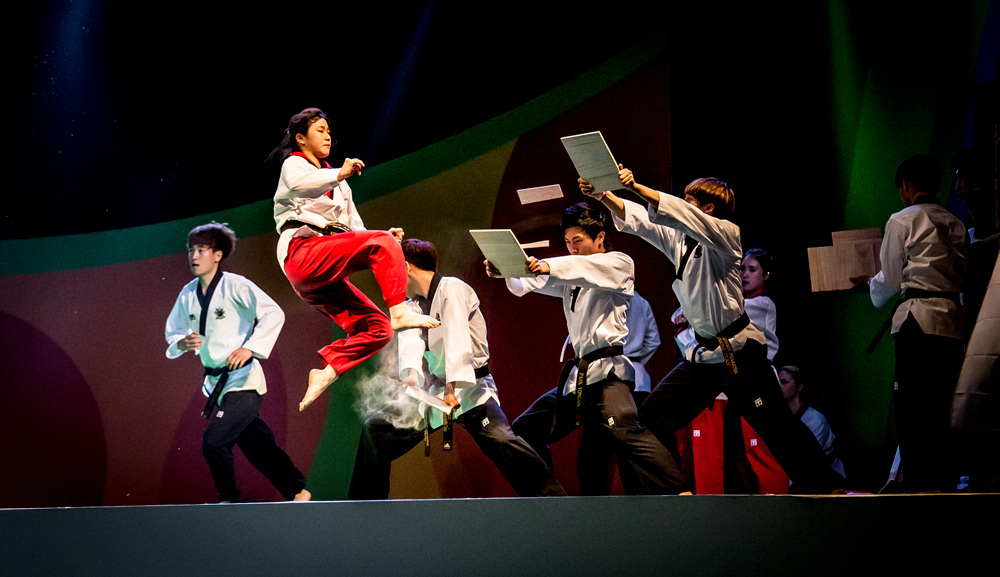 RIO DE JANEIRO, Brazil (Aug. 16, 2016) – With just 12 hours to go before the 2016 Olympic Taekwondo event kicks off, the WTF Demonstration Team rocked the crowds at Rio’s Olympic Park on Tuesday evening with their trademark blend of high-flying martial arts and high-octane performance elements.

Following a show by a Brazilian rock band and live feeds of Olympic track and field events on LED screens, the WTF Demo Team – 22 persons strong, including players from Denmark, Mexico, Turkey and Brazil – took to the stage at the “Live Site” in Rio’s Barra Olympic Park. As action got underway, curious crowds, drawn by the pulsating music accompanying the demonstration, drifted over from across the sprawling complex.

Things began with team members performing moves from the native Brazilian martial art of capoeira – supplemented with some trademark taekwondo kicks. The next element was coordinated poomsae, then the pace picked up with some high-kick breaks that drew applause.

From that point on, the action moved into top gear. To the tune of the iconic “Rocky” theme, a faux sparring match was held, followed by a demonstration of gymnastic flips and spin kicks – including the awesome 540-degree jump spinning heel kick.  Combat demonstrations – a gang fight, then a battle between armed and unarmed fighters – followed.

The pace slowed with a female team poomsae show amid billowing dry ice and an unusual performance of what can only described as a broken-hearted lover’s poomsae. Yet more kick breaks, power breaks and poomsae were showcased before – in another nod to the 2016 Olympic host – the team broke into a samba dance, with the boys attired in white dobok and the girls in red dresses.

The team was well received.

Young children at the front scrambled to retrieve pieces of splintered boards as souvenirs, while Olympic fans, dressed casually in national strips and shorts, looked on from a safer distance. A particularly well-dressed audience component was the WTF Council, which turned out to support the team: They sat on the site’s lawn in their suits and ties.

At the conclusion of the demonstration, an informal meet ‘n greet between the team and the council turned into a fan photo session as enthusiastic audience members wandered over to take selfies with the performers.

And the demonstrations are not over. With the WTF leadership vowing to deliver a “festival of fight” in Rio, the team will perform during the intervals of the four-day Olympic taekwondo competition that kicks off on the 17th. They will also be taking to the streets of the city after the competition concludes.