Double Olympic gold medalist Jingyu Wu hopes to win a third in Rio. Remarkably, her Olympic victories were foretold in the movies before they became reality… 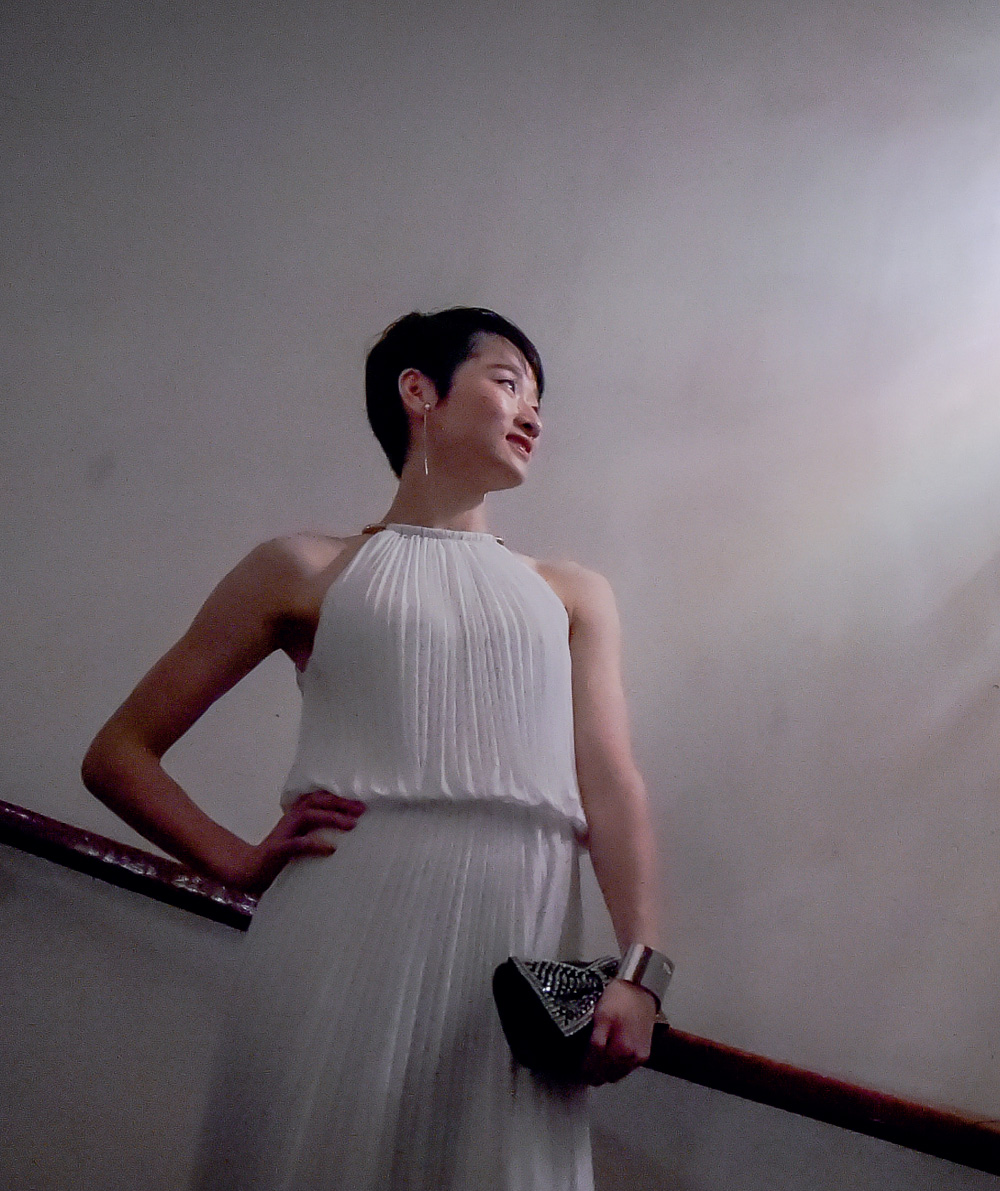 I t was one of those curious coincidences that could only happen in real life – for if it had occurred in literature, it would have been unbelievable.
In 2003, Jingyu Wu, then an unknown, provincial-level taekwondo player, was chosen to play a bit part in a movie. Named “Taekwondo” and starring well-known Chinese actress Tao Hong, the film told the story of a girl who becomes an Olympic champion in the sport.
Wu played the star as a youth in a role that gave her perhaps five minutes of screen time. “I was just a common athlete at the time,” Wu recalls. “Just a little girl.”
Fast forward five years to 2008 and the Beijing Olympics. When the dust had settled in the arena, the girl from Jiangxi Province who had played a filmic taekwondo champion was wearing a real-life Olympic gold medal around her neck. Reality had mirrored fiction.
Wu repeated her gold medal heroics in London 2012, and, in the female -49kg category the diminutive Chinese is the favorite for a third gold in Rio 2016. That would ensure her a page in the history books as the first taekwondo player ever to earn three Olympic golds.
She may be the most dominant female player in the sport. Her footwork is superlative and her timing almost supernatural, making her appear one step ahead of her opponents. She prefers the front-leg kick, but has extraordinary flexibility, and is able to score from any height and angle – a talent which has earned her the nickname “Superkicker.”
Taekwondo pundits are in awe at her mastery of the game.
“She shows everything – mental game, physical game, style, fighting pattern – that means, the template for the fight – and strategy,” said WTF Director General Jin-bang Yang. “She tries to be spectacular, to show all the taekwondo skills,” added another taekwondo watcher. “In my opinion, she is on a level above all the other athletes.”
Yet on the mats, she does not express the passion of many athletes; in the eye of the storm, she maintains an icy composure. “I am very calm,” she admits. So is she standoffish?
No. Despite her towering skill, Wu is tiny in stature. In person, she displays real charm, fiddling with the flowers on the table during the interview, frequently beaming with a shy, girlish grin. She has adopted the English name “Joy” – a direct translation of her Chinese name, Jingyu – and it is appropriate: She epitomizes the quality, albeit in a quiet, understated manner.
Wu’s taekwondo story started at age 13. As a child she was raised by her grandmother in the town of Jingdezhen, famed as the porcelain capital of China, in Jiangxi Province. She was good at sports, and a particularly fast runner.
One day, a taekwondo coach arrived at her school, scouting fresh talent. Someone suggested he take a look at Wu. The coach liked what he saw; Wu took up the sport; and after just two months training, she won the Jiangxi Provincial Championships. Not bad for a 13-year-old.
So was she a natural talent? “You could say that,” she said – but credits her success to bitterly hard training. For three years, from 15-18, she built a foundation by training a murderous 10 hours per day. “I used those three years,” she said. “Most people would need 10 years!” 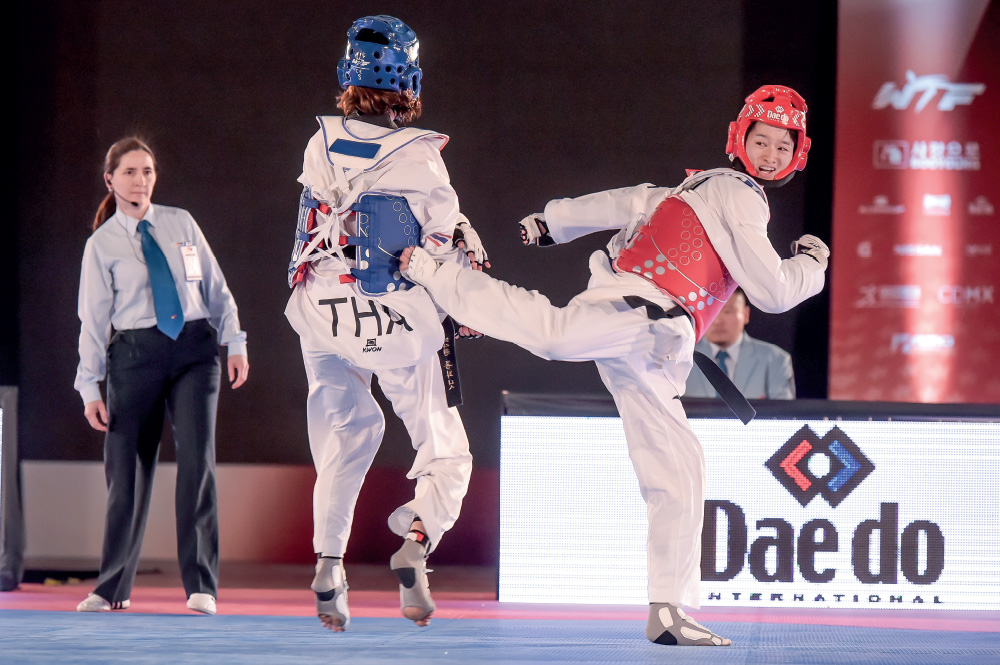 Due to her stature, she had to work extra hard. “At the beginning, nobody cared about me because I was very tiny, nobody thought I would be world champion.” she said. “I had to get stronger and fight everyone in every competition.”
Even today, the double Olympic gold medalist still trains five hours daily.
Like many fighters, she is not completely happy with the current game. “The PSS is a little sensitive, so you just need a front-leg kick, but that is not the real taekwondo, nobody likes to watch it,” she said. “I like to use the front leg but I do a lot of different things with it.”
Although China boasts a universe of home-grown martial arts – ranging from hard systems patterned after animals such as tigers and eagles to the soft, philosophically influenced taijiquan – the country has enthusiastically embraced taekwondo. “There are almost 20,000 clubs across China,” she said. “A lot of children practice it, so it gets public recognition.”
The sport has been good to Wu. “Choosing to do taekwondo was the best decision in my life,” she said. Her husband of three years added ruefully, “She has two loves – taekwondo and me!” She has just one regret. When her grandmother – who had raised and taken care of the young Wu until she joined the Jiangxi Provincial Team – passed away, Wu was competing, so could not be there.
In addition to training, Wu teaches sport at Renmin University in Beijing and spends as much time as possible preaching to children and youth on the benefits of sport and Olympism. She also donates to, and supplies underprivileged children with sporting equipment. When presenting to youth, Wu tries to inspire them with her own life lessons. “First – train hard! Second – never give up!” she said. “A human being can do anything with self-belief.”
Her husband, Huo Kun, runs a company promoting Olympism, “Exceptional.” He possesses a large collection of Olympic memorabilia but admits that his most prized exhibits are Wu’s two gold medals – not to mention Wu herself.
The couple believes Wu’s Olympic destiny may have been set in the stars. “I was born on July 13, 1987,” she said. “That was a very important day for the Chinese Olympic movement, as we won the bid for the Beijing Olympics on July 13, 2001.” In London, she won gold on August 8, 2012; August 8, 2008, had been the opening ceremony of the Beijing Olympics.
The duo have been befriended by IOC President Thomas Bach, who wrote the foreword for their jointly authored book “Olympic Love.”
Her selection by her peers as “the 2015 Female Player of the Year” at the National Theater in Mexico City, Mexico in December 2015 was no surprise. Virtually all her fellow athletes are in awe of her mastery of the sport and say how likeable she is in person.
Having won gold at the Mexico City 2015 Grand Prix Final in a convincing style, Wu has comfortably earned her NOC a spot in Rio. She still finds “hard training no problem,” but now she is 28 – an “advanced” age for an elite athlete – she is boxing clever: “The most important thing is technique and scientific fighting,” she said, adding that she will sit down with Team China to analyze all the opposition.
However, she admits she does not have the hunger for gold in Rio that she had in Beijing and London. So why is she competing? “Because I love taekwondo!” she said. “After Rio, maybe I will retire, but competition is very, very precious to me, I want to enjoy every moment. After I retire, there will be no more.”
There is also the matter of children. “I would like to have a baby,” she said. “One? Two? Three? Four? Five? Maybe one will be enough!”
Beyond taekwondo, she enjoys hand arts, such as flower arranging, painting, “though I am not that good,” and cooking. (Her husband confirms that she is skilled in that area.)
If she does retire, post-Rio, she will continue to teach sport, and would like to open a taekwondo school and coffee shop. “I want to relax after all the hard training,” she said. “So I will make the club near the coffee shop, and will be able to watch the taekwondo fighters!”
The name of the club she envisions reflects her name, her outlook and her life experience: “Joy Taekwondo.”