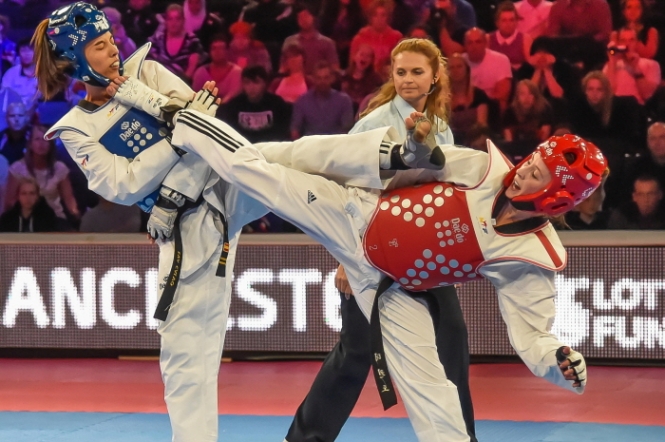 Jade Jones will evoke the spirit of London 2012 when she and her Great Britain team mates fight for the final time in front of a home crowd before next year’s Rio Olympics.

Golden girl Jones, Britain’s first ever Olympic taekwondo champion, will be one of the star attractions when Manchester hosts a leg of the 2015 World Taekwondo Federation World Grand Prix series from October 16-18.

Welcoming the decision of the sport’s world governing body, the World Taekwondo Federation, to announce Manchester as a host city for a third time after a successful bid by GB Taekwondo, Manchester City Council and UK Sport, Jones is keen for elusive home GP success.

After silver medals at the 2013 and 2014 editions, the reigning female World Grand Prix series champion hopes to make it third time lucky on her home mats.

“London 2012 really helped raise the profile of taekwondo and the Grand Prix series is another brilliant way to showcase the sport,” said the 21-year-old Welsh born talent.

“I always love fighting in front of home crowds. And with the world’s best fighters expected in Manchester, that support will be crucial for me and the rest of the GB Taekwondo squad.

“Plus it is a great opportunity for a British audience to watch many athletes who will also be competing at next year’s Olympic Games in Rio.”

Jones, nicknamed ‘Headhunter’ due to her aggressive style of fighting, stunned world number one Calvo Gomez in the WGP series final in Mexico last December. Victory also earned the Flint raised favourite the accolade of WTF Female Athlete of the Year.

“I knew I was good enough to beat Eva but I seemed to have mental problems every time we met,” admitted Jones. “Even in the future I know it will be super hard against her.

“She is a great fighter but hopefully that win in Mexico will stop people saying:’will she ever beat her?’ because I have done it and beaten her in a really big competition.

“It’s a massive year for me and all taekwondo players with the Grand Prix series starting again, the World Championships and the first ever European Games.

“Fortunately for me I feel I am in a good place. I just want to keep improving and to get stronger and stronger.”

“This will be the third time that the world-famous city has hosted our premier event and I have no doubt that they will deliver a world-class competition.

“We know first-hand just how much passion that exists for taekwondo in Manchester and the UK and I am sure we will be treated to an electric atmosphere in October.”

Steve Flynn, Operations Director for GB Taekwondo, said:”To have again been awarded the right to host the World Taekwondo Grand Prix is testament to the fantastic partnership we have with our key stakeholders, our event delivery team and our superb army of volunteers.

“Manchester’s leg of the Grand Prix series will be hugely influential towards securing all important qualification spots for the 2016 Rio Olympics. And once more we’ll see the best fighters doing battle on the mats.

“We are grateful to the World Taekwondo Federation for giving us this opportunity to showcase our sport, both domestically and internationally, for that last push on the road to Rio.”

Councillor Rosa Battle, Manchester City Council executive member for culture and leisure, said: “As the home of British Taekwondo we’re proud to be hosting the World Taekwondo Grand Prix for the third year in a row.

“The competition has proved incredibly popular in the past and I am sure interest and support will be evener greater this year building on past success.

“This is a great chance for local residents to witness some of the world’s best athletes competing on their doorstep and will also draw sports fans to the city from across the world for what is certain to be a breathtaking competition.”

The World Taekwondo Grand Prix forms part of UK Sport’s major events programme, which is investing around £27million of National Lottery funding to bring up to 70 world class events to Great Britain by 2019.

Simon Morton, Director of Major Events and International Relations at UK Sport, said:“It’s fantastic to see the 2015 World Taekwondo Grand Prix return to Manchester. It is the third time that Manchester has hosted this competition, and the fact it is coming back in 2015 is recognition of the outstanding host city and passionate sports fans.

“Competing in front of a home crowd will provide the British fighters with a great platform to succeed on the Road to Rio. The event takes place with less than a year to go until the Rio 2016 Olympic Games so getting a packed out venue to cheer on our team is a fantastic opportunity.

*Further details will be announced in due course on the GB Taekwondo website, www.gbtaekwondo.co.uk