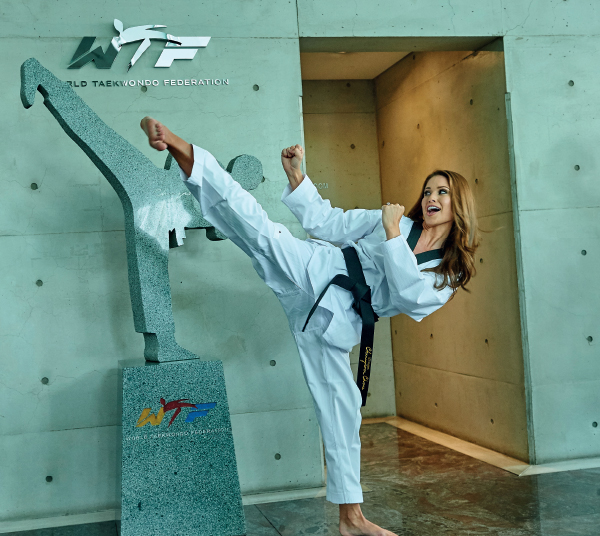 Taekwondo is one of the world’s most physically beautiful sports and now it has won an appropriate endorser: America’s most physically beautiful woman has agreed to promote it.
Nia Sanchez is America’s most attractive woman, and that’s official: She was crowned “Miss USA” in 2014. But that is not the reason she was named an official promoter of taekwondo: She also holds a 4th dan black belt in the combat sport, which she has been practicing since age 8.
Sanchez, 25, was named a WTF “Goodwill Ambassador” at a ceremony presided over by WTF President Chungwon Choue at the federation’s central Seoul headquarters on July 27, 2015.
“I will speak out on behalf of taekwondo and how it has a positive impact on you, whether you are 8 or 80,” she said during a luncheon with WTF executives and taekwondo masters after the ceremony.
After her whirlwind July tour of Korea – taking in Muju’s Taekwondowon and Seoul’s Kukkiwon, among other locations – Sanchez agreed to appear at the World Grand Prix Finals and the annual Gala Awards in Mexico City.
Choue expressed his hope that Sanchez’s endorsement would allow taekwondo to reach a new youth audience beyond the dojang and the competition mats.
That looks feasible, for Sanzhez has already put taekwondo on the beauty circuit’s radar. During a Miss USA photo shoot, she demonstrated board breaking in unusual attire for a taekwondo athlete: An evening dress! “It turned out pretty cool,” she said.
Now the Sacramento native is moving beyond her beauty queen role and relocating to Los Angeles. In the world’s entertainment capital, she will be expanding her skills portfolio to encompass red carpet event hosting, fronting entertainment shows and acting as an extra in various productions.
That kind of ambition demands more than simply a head-turning physical presence. Fortunately, Sanchez has what it takes.
“She is not only a good fourth-degree black belt, she speaks so well!” enthused Master Sang-chul Lee, the former U.S. Olympic coach, who invited the beauty queen to address the US Open Taekwondo Hanmadang in Colorado Springs. “I speak at taekwondo tournaments, but I also speak regularly at schools and universities on never giving up on your dreams,” Sanchez explained.
She credits taekwondo with much of her success, gifting her with discipline and self-control. Sanchez stressed that the central taekwondo tenet of perseverance equipped her with the determination to overcome defeat and continue entering beauty pageants before finally being crowned “Miss USA” in 2014.
“I tried five times to become ‘Miss USA,’” she mused. “I would not have been a good ‘Miss USA’ at 19, but when I had matured, then I was ready for the job.”
Moreover, it was taekwondo which laid the physical foundation on which she built her jaw-dropping physique.
“When I was young, all I did as a workout was taekwondo, though when I started pageants, I needed a slightly different body type,” Sanchez said. These days, she hits the gym three-five times a week in addition to “a little taekwondo.”
While taekwondo may not quite be the perfect exercise – elite players supplement the sport with gym work for strength and roadwork for cardio – it does offer one of the best overall packages in existence. “It works the entire body, it is a great, well-rounded fitness program,” added Colorado-based instructor Jay-kuk Lee, who, along with his father Sang-chul Lee, was accompanying the beauty queen on her Korea trip.
“When I do taekwondo, I feel muscles I have not felt in a long time!’ Sanchez said.
But taekwondo is not simply a mental/physical exercise regimen, it is also a martial art teaching self-defense techniques. Has Sanchez ever had to call upon her fighting skills in perilous situations?
“I have never had to use it in an alley or on the streets, but I have used it in crowded places, like bars,” she said. “Even at ‘Miss USA,’ people get really excited and grab you when they want to take a picture; the escape techniques of taekwondo are really effective!”
Alas, there is sad news for romantically inclined taekwondo bucks who might be reading this and wondering if they have might score a date with the WTF’s newest goodwill ambassador: Sanchez is engaged to actor Daniel Booko. 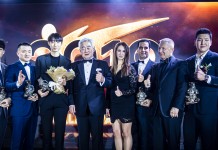