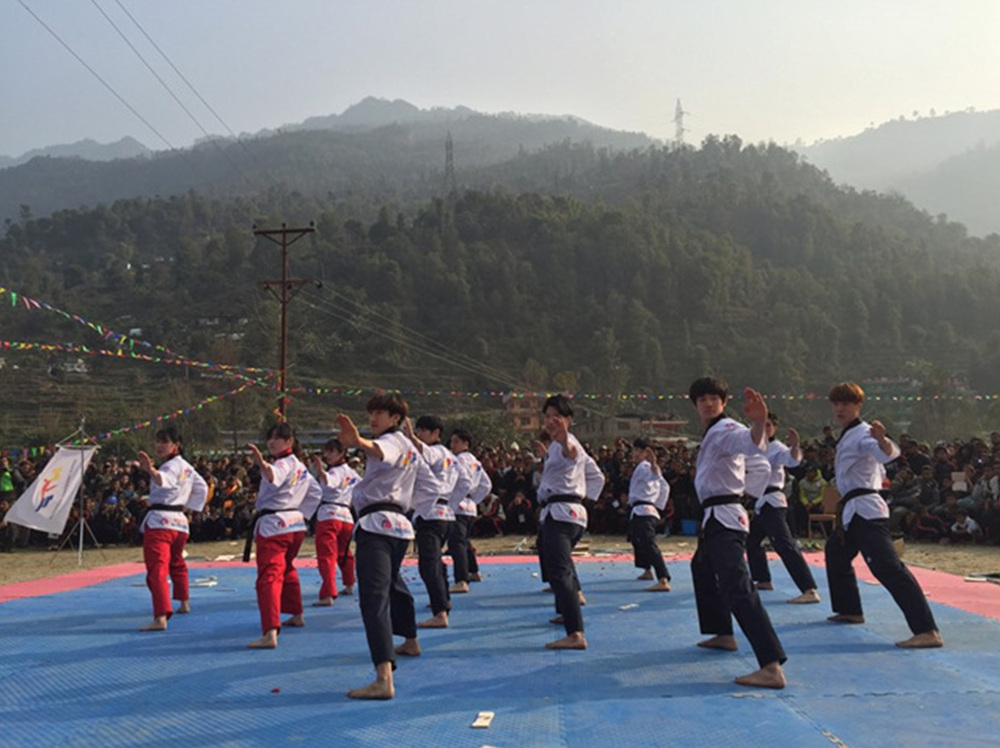 KHAANDI CHAUR, Nepal (Jan. 31, 2016) –Sunday was a day of contrasts for the WTF humanitarian mission as it travelled to the worst-hit region of earthquake-struck Nepal. There was joy at the rapturous reception they received, followed by heartbreak at the apocalyptic devastation they witnessed.

On Day 3 of their fact-finding tour of the Himalayan nation, the delegation, led by WTF President Chungwon Choue, visited the Sindhupalchwok district to inaugurate a WTF Taekwondo Humanitarian Foundation (THF) pilot project.

The WTF delegation, which arrived in Nepal on Jan. 29 for a weeklong visit, included a 15-memer WTF Taekwondo Demonstration Team and three of five WTF Continental Taekwondo Union presidents.

After a nearly three-hour drive from Kathmandu through winding, alpine roads, the delegation debussed outside the town of Khaandi Chaur, set in a river valley overlooked by steep-sided mountains.

The scene that awaited them was astounding.

The little town’s main street was lined with cheering schoolchildren attired in taekwondo tracksuits. Traditional dancers and a band playing giant brass trumpets serenaded the delegation, while townspeople cheered from streets, shops and even rooftops. As delegation members proceeded through the packed crowd, their necks were draped in garlands – scarves and floral necklaces. 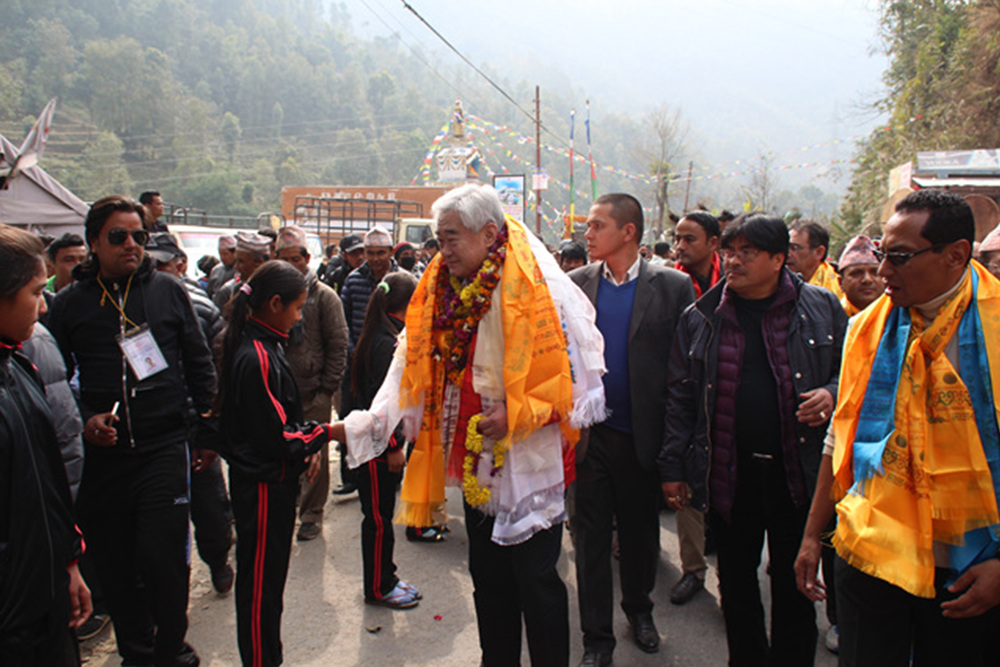 At the Shree Bal Shikchha Higher Secondary School compound, a huge crowd waited as the WTF officials and local and national VIPs mounted the dais.

In an impassioned welcoming speech, Nepalese Youth and Sports Minister Shatya Narayan Mandal reminded the crowd of the power of sport. “All around the world people know Messi even if they don’t know who the president of Argentina is,” he said, referring to the legendary footballer. “This shows that sport can be more powerful than politics.”

The sports minister said that moves were afoot to make taekwondo a national sport in Nepal, before handing over the rostrum to the WTF leader. He said that he would “recommend taekwondo as the national sport” at the National Assembly. “We are here to support you, we are specially here to support this region, and we are here to support your children,” WTF President Choue said. “I saw the young practitioners’ eyes, and saw how eager they are to learn taekwondo.”
After another speech by the guest of honor, Nepalese Vice President Nanda Bahadur Pun, the THF project was officially inaugurated.
A check for US$10,000, 300 taekwondo uniforms and three boxes of kicking pads were presented by the WTF delegation to local officials, before plaques of appreciation and citations were handed to Nepalese VIPs.

Then the WTF Demonstration Team took to the field. With their customary excellence, they performed high-altitude board breaks, self-defense techniques and gymnastic moves – spiced up with a 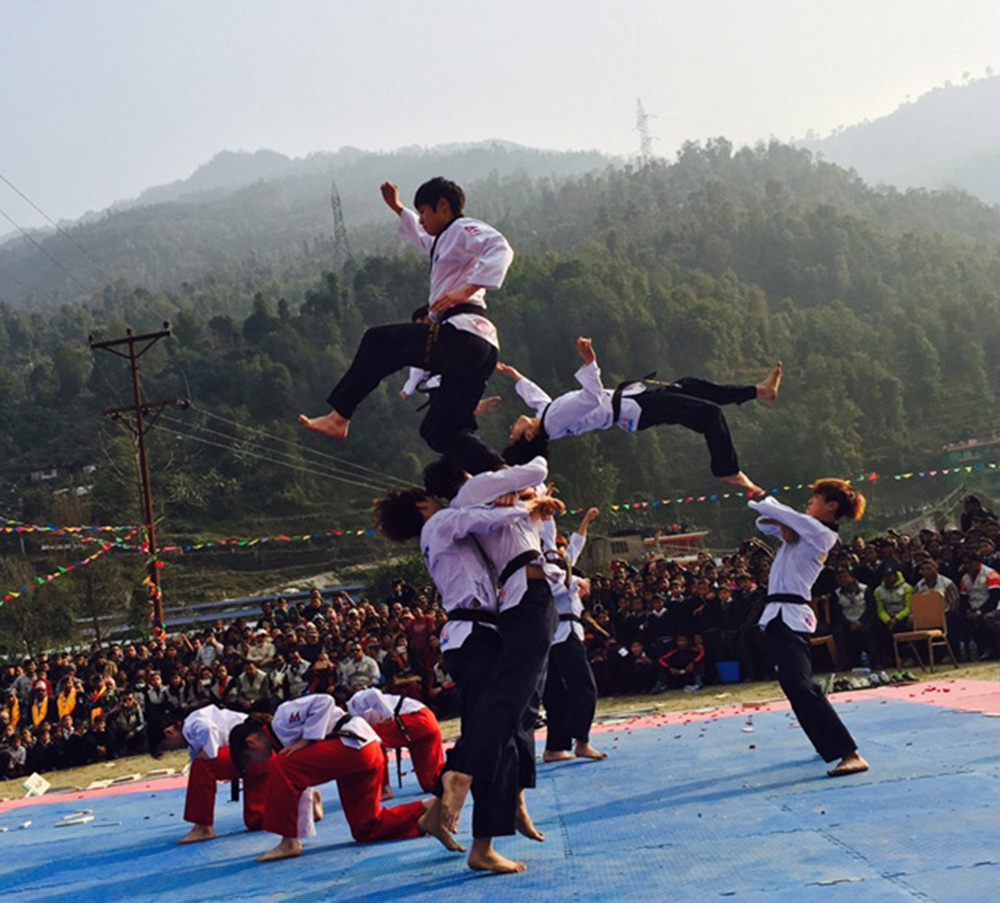 funky routine to the latest Psy hit, “Daddy” and some Nepalese-inspired dance moves. They drew laughs, cheers and applause. The Demonstration Team were followed by troupes of traditional Nepalese dancers.

The delegation re-boarded their transport and continued driving. Across the district, 3,640 people were killed by the April 2015 earthquake, 20,000 were injured and 70,000 homes were badly damaged. While the town of Khaandi Chaur itself did not appear heavily impacted, the scenes several miles up the road were somber.

Buildings in all the villages and towns were interspersed with piles of bricks and rubble. In a surreal sight, several houses and pylons had subsided into a river.  Then the convoy passed through a kilometer-long stretch of what looked like a lunar landscape – pile after pile after pile of giant boulder. The result of a calamitous landslide, it was a scene of almost Biblical destruction.

“I had never been in an earthquake zone before today,” said Oceania Taekwondo Union President John Kotsifas. “I was overwhelmed and shocked.”

Raja Khadka, 12, a pupil at Shree Bal Shikchha, will never forget the day the earth shook.

“I was in the forest when I heard a sound that I thought was a helicopter – but there was no helicopter,” he said.  “I ran and I found my father, but our home had been totally destroyed; there was a buffalo wandering in the ruins.”

A taekwondo practitioner, he said it is, “a very good and disciplined sport.” What were his thoughts on meeting such a high-profile delegation visiting his hometown? “I am very, very happy,” he said.

With the pilot project inaugurated, it is now incumbent upon the THF to deliver hope to thousands of children like Khadka across Nepal – by giving them a gift will build their physiques, forge their characters and help them overcome their traumas.

That responsibility was fully understood by  Choue. 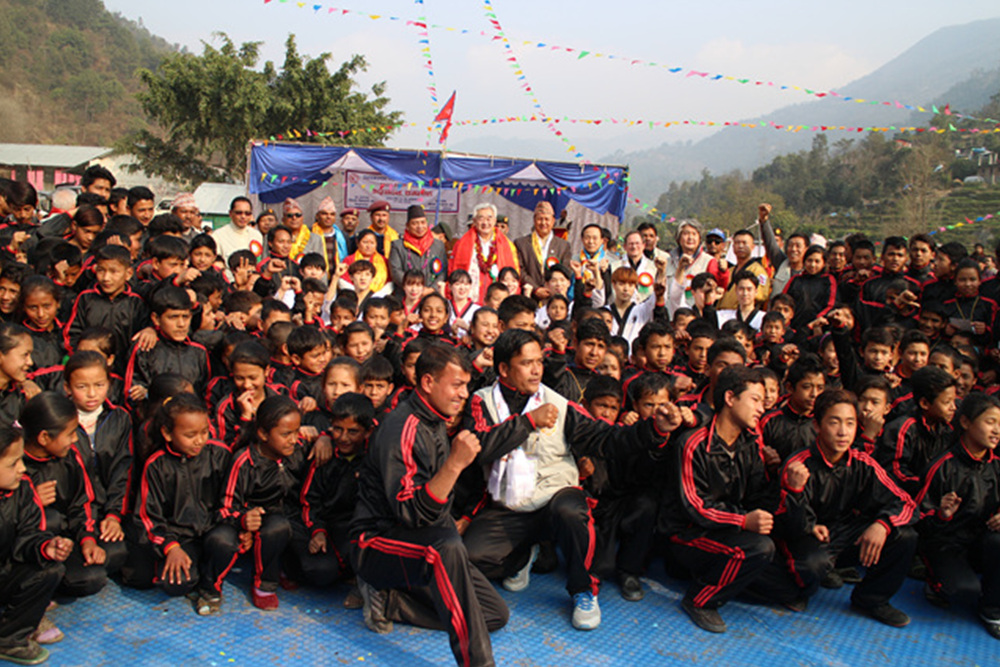 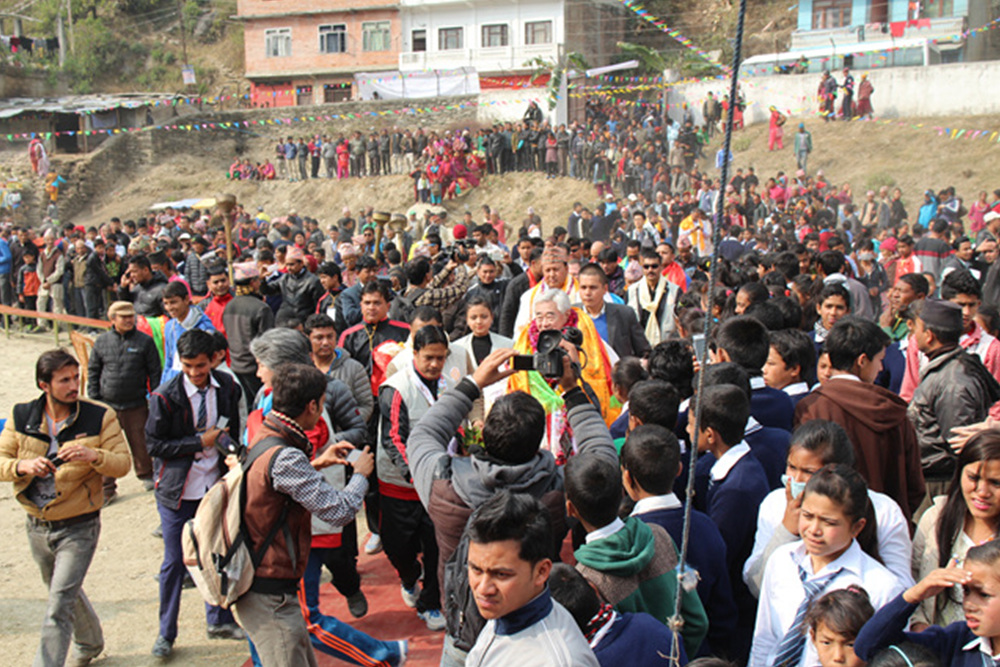 WTF President Chungwon Choue is welcomed and surrounded by the people in Khaandi Chour, Sindhupalchowk, Nepal 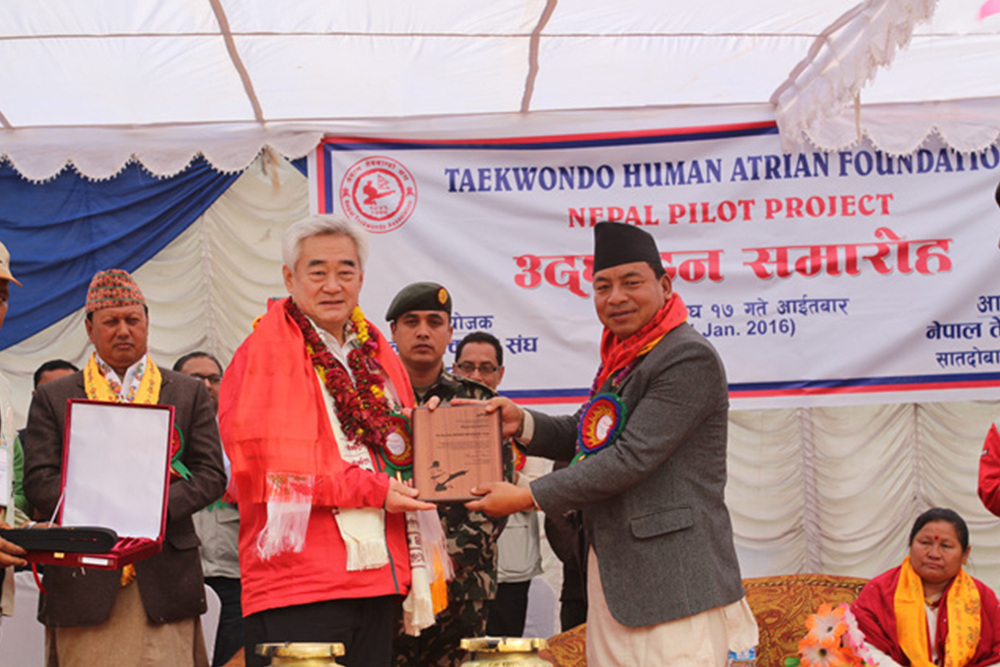 WTF president Chungwon Choue is handing out an appreciation plaque to the Vice-president of Nepal, Nanda Bahadur Pun 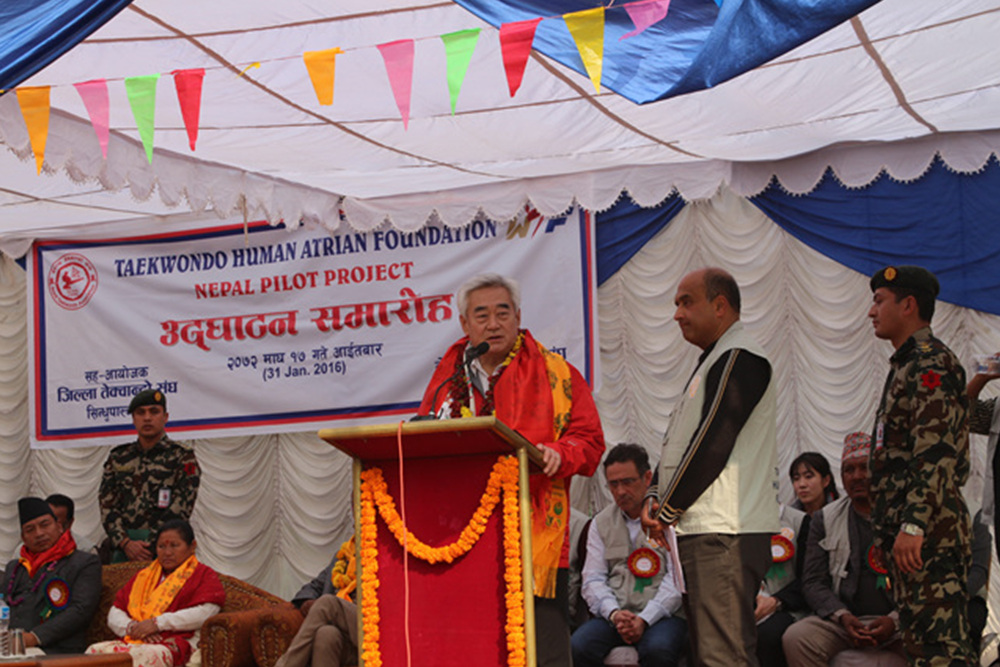 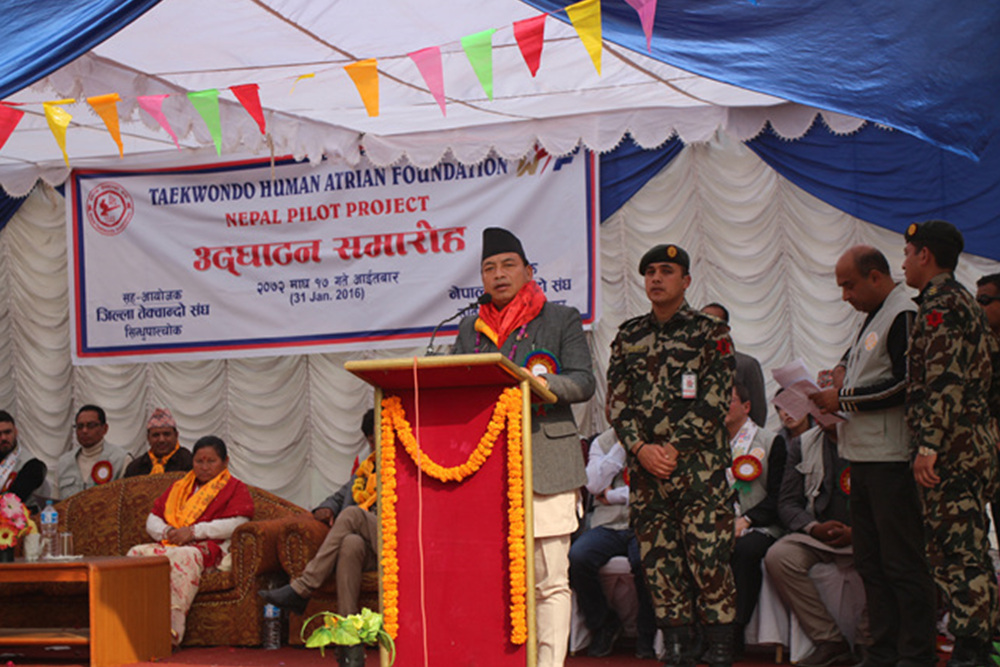 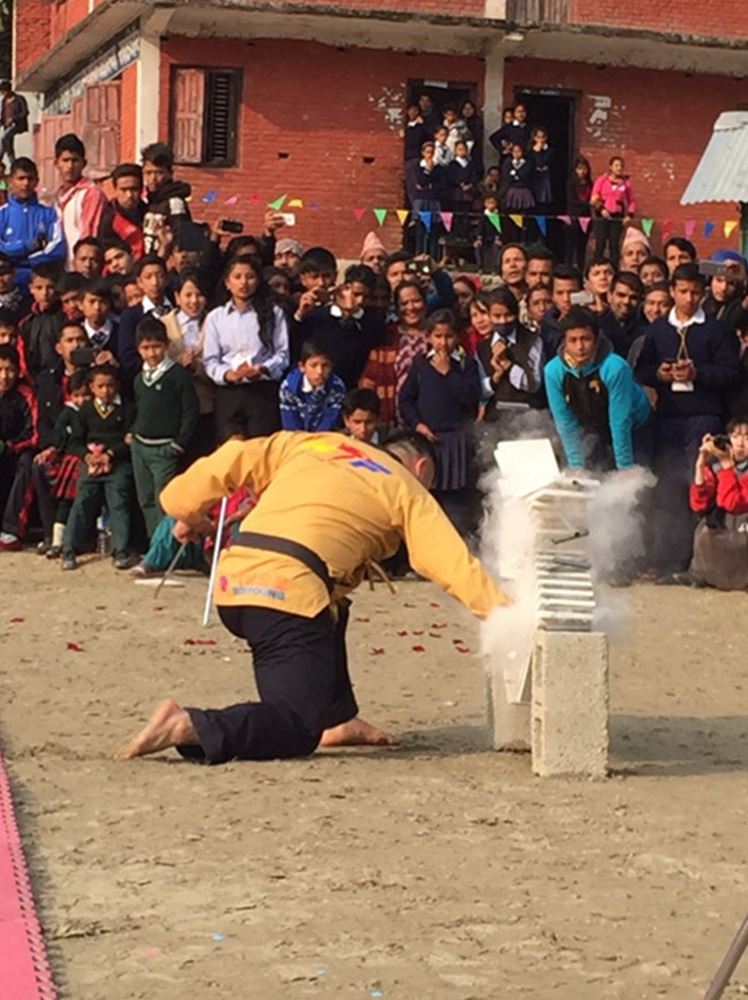 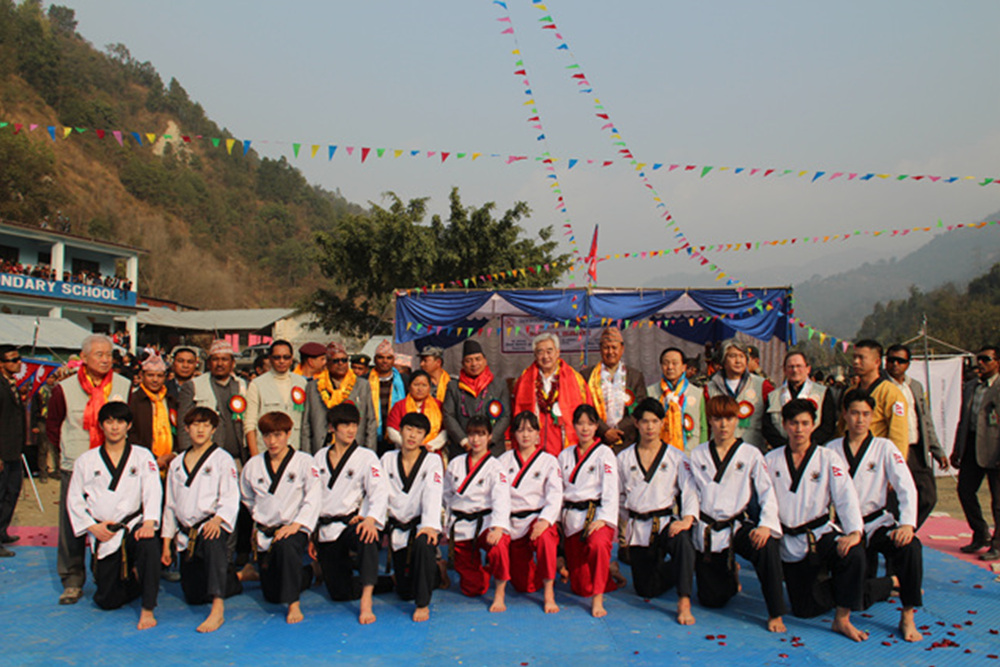 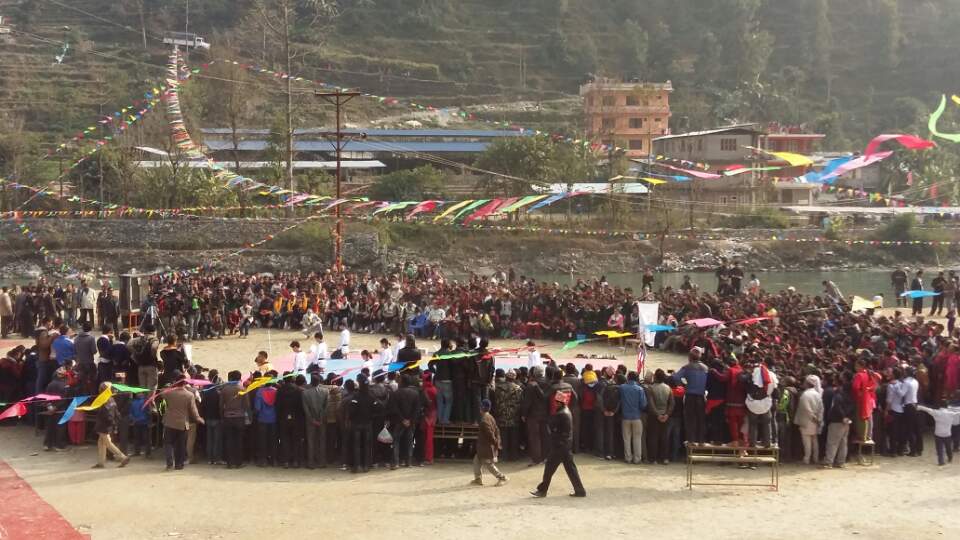