BAKU, Azerbaijan (Dec. 11, 2016) – The WTF put on the ritz as it held its 3rd Annual Gala Awards in the ballroom annex of Baku’s Badamdar Hotel – and also raised over USD60,000 for its charity initiative, the Taekwondo Humanitarian Foundation, or THF.

As part of efforts to make the federation fully athlete-centric, the WTF Gala Awards offer taekwondo’s elite sportsmen and women the opportunity to network and relax in evening wear rather than tracksuits and in luxury surroundings rather than sweaty warmup zones, while dining on five-star hotel rations rather than high-protein energy bars.

In an opening address, WTF President Chungwon Choue discussed how the “World Taekwondo Family” enjoys both good times and bad times together, and how its humanitarian initiatives for refugees and displaced people around the world make it different from other sports organizations.

He congratulated the Azeri Minister of Youth and Sports Azad Rahimov – who attended the Gala Awards – on the country’s only gold medal in the Rio Olympics, won for Azerbaijan by Radik Isaev – one of the award nominees. Choue also shared the news that Djibouti had recently joined the WTF as a full member, meaning the WTF now has 207 member national associations.

He also commented on the amended rules and regulations, to be applied from next year. “We will have a new taekwondo competition at the 2020 Tokyo Olympic Games,” he said. “I believe it will showcase taekwondo as the ‘best of the best’ combat sports in the world.”

WTF Vice President and Azerbaijan Taekwondo Federation President Kamaladdin Heydarov received a special awards by Choue. Heydarov thanked the WTF for holding its year-end events – the Grand Prix Final, World Taekwondo Team Championships and Gala Awards – in Baku, and was given a special award by Choue. 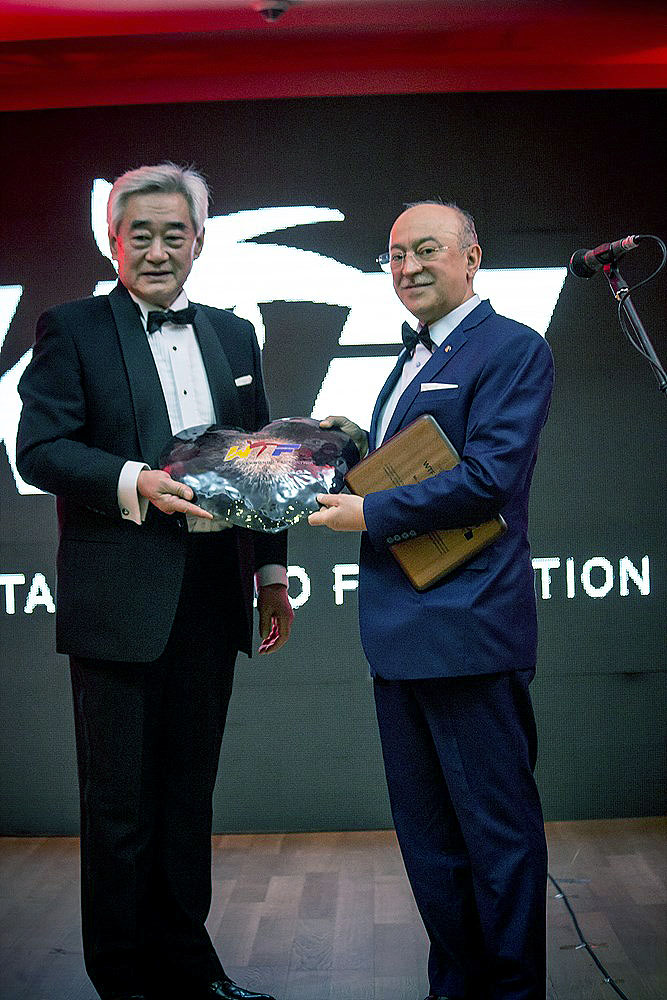 Minister Rahimov was also given a appreciation plaque. “It is a high privilege to be here with you and we are proud to host this event,” Rahimov said, noting that Azerbaijan “is a land of fire and a country of sports.”

A local warbler then took to the stage and, against a kaleidoscopic backdrop, delivering a series of local hits and lounge classics like “Georgia on my Mind.” The crowd amused themselves mugging for the roving camera, then got into the swing of things when a songstress appeared and delivered a pair of soulful Azeri numbers which had the crowd exercising their clapping muscles.

Then it was time for the awards.

The Female Player of the Year award went to Great Britain’s double Olympic gold medalist Jade Jones. “I would just like to thank everyone who supported me – the support is phenomenal,” she said.  “We train so hard, we are constantly getting pushed and getting the best training. Thank you everyone!” 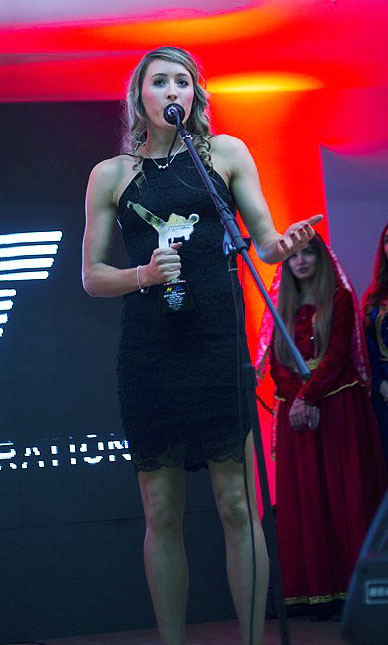 The Male Player of the Year award went to Jordan’s Ahmad Abughaush, who delivered his country its first-ever Olympic medal in Rio – gold. He thanked the president and members of the WTF, adding, “I am so proud to be here with you, with the referees, coaches and players.”

The Referee of the Year Award, Women, went to Maria Merkouri of Georgia. “Thanks to all of you,” she said. “And thanks to my dear friends the referees – you are the best!”

The Referee of the Year Award, Men, went to Song-chul Kim of Canada. “I am really honored to accept this award, it means a lot to me and I would like to say thank you to all of the taekwondo family for supporting me,” he said. 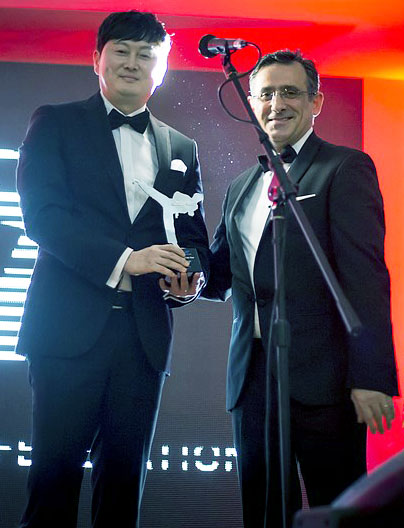 The Best Member National Association of the Year award was won by to Azerbaijan – a decision that was clearly popular with the crowd. 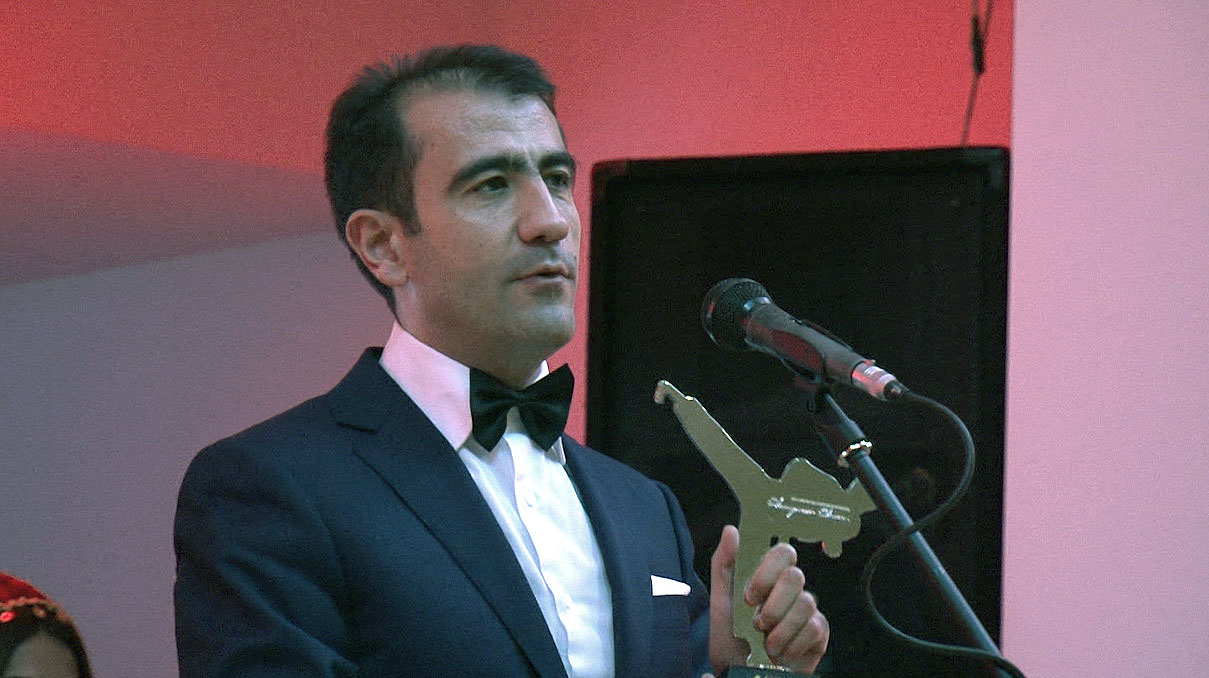 The Best Kick of the Year award was won by Cote d’Ivoire’s Cheick Salleh Junior Cisse (who did not attend) for his last-second jump spinning heel kick to the head of Great Britain’s Lutalo Mohammad – which won him the gold in the -80kg category in Rio.

The Coach of the Year award was won by Azerbaijan’s Reza Mehmandoust. He noted that his team had great support and thanked Choue and all persons attending. 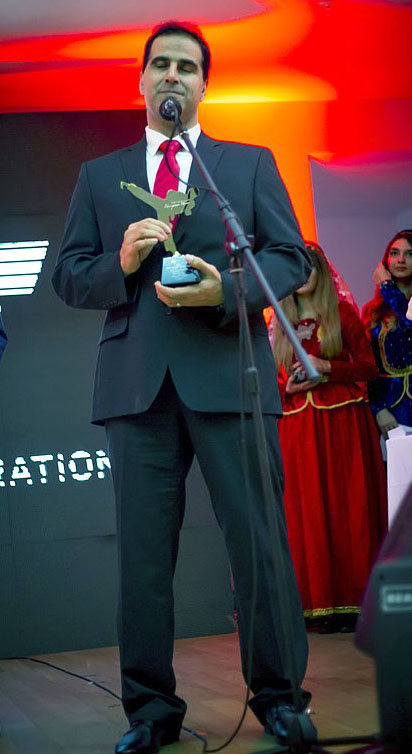 The last event of the gala awards was the THF Challenge. Branded “Break Boards, Change Lives” the event was rapid fire, with various VIPs being invited to the stage to break a board, pledge a donation and challenge another person present.

Following the awards, dinner was served. There may be some sore heads tomorrow as the federation returns to business as usual: The 2016 World Taekwondo Team Championships kick off at 10:00 AM on Dec. 12 at the Sardhachi Olympic Center for a two-dy run. 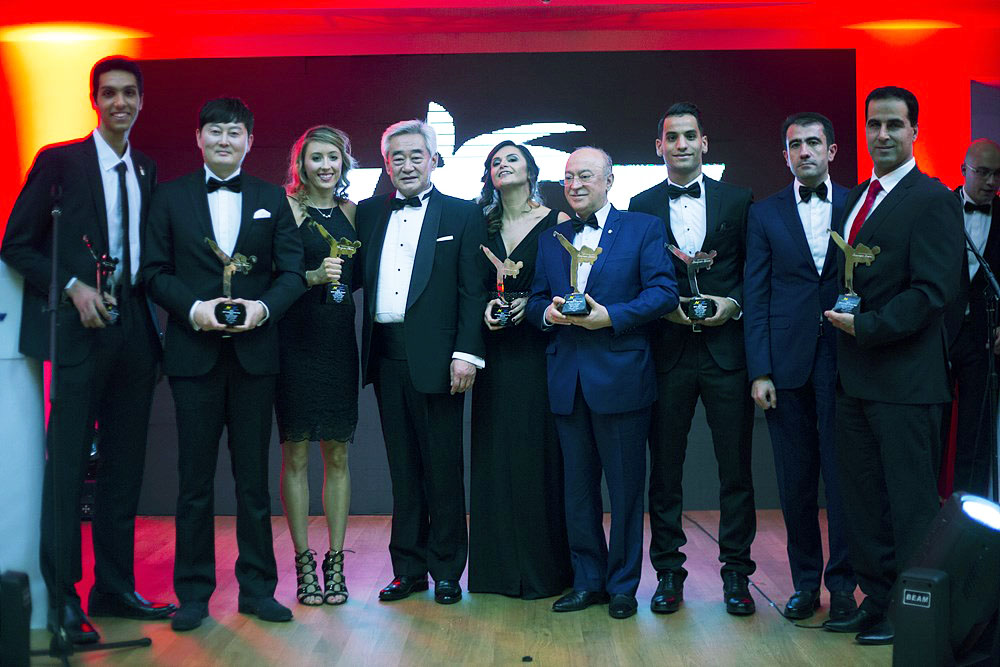