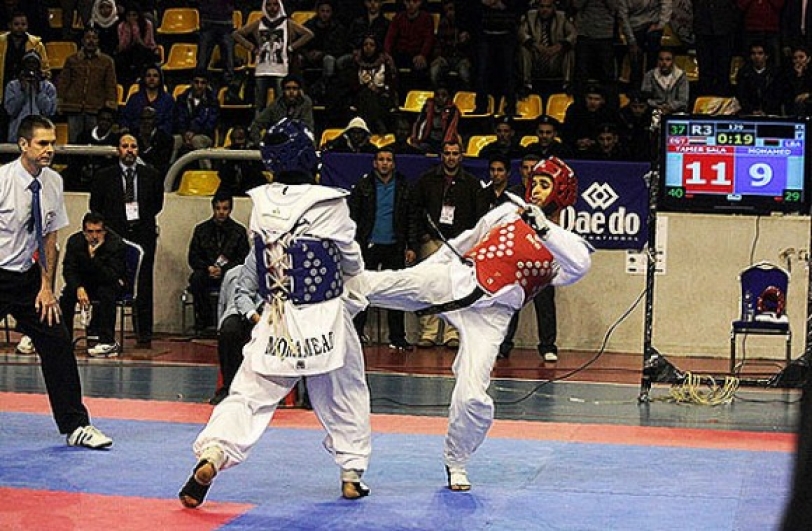 The WTF African Qualification Tournament for the 2012 London Olympic Games kicked off at the Cairo International Stadium in Cairo, Egypt on Jan. 11, 2012 for a two-day run.

A total of 85 athletes from 30 African countries are competing for 16 places for the taekwondo competition at the 2012 London Olympic Games. After one day of competition, seven countries earned at least one Olympic berth Host Egypt secured two tickets, while six other countries – Gabon, Nigeria, Algeria, Morocco, the Central African Republic, and Cote d’Ivoire clinched one ticket each. In the men’s over 80kg category, Gabon’s Anthony Obame required a sudden-death round to defeat a two-time world champion Daba Modibo Keita of Mali in a semifinal match and qualified his country.

The other ticket of this division was taken by Beijing 2008 Olympic Games bronze medalist Chika Yagazie Chukwumerije as he defeated Firmin Zokou of Cote d’Ivoire in a semifinal match. In the final, Anthony Obame won the 1st place as Chukwumerije withdrew in the final. In the men’s under 58kg division, Mokdad El Yamine of Algeria grabbed a ticket by defeating Fenosoa Rabeniala of Madagascar.

Algeria was qualified for the Olympic Games for the first time in taekwondo. Athens 2004 Olympic bronze medalist Tamer Bayoumi of Egypt qualified his country by winning over Libya’s Mohamed Tlish in a very-close semifinal match. Tamer Bayoumi grabbee the 1st place in the division as Mokdad El Yamine of Algeria withdrew from the final. In the women’s under 49kg category, No.1 seed Sanaa Atabrour of Morocco reserved a ticket for London by beating Tunisia’s Fadia Farhani in a semifinal.

Morocco’s Sanaa Atabrour clinched top honors in the category by defeating Catherine Kang of the Central African Republic 4-0. In the women’s under 67kg division, Seham El Sawalhy earned her country another Olympic ticket by defeating Gladys Mwanki of Kenya in a semifinal match by a point gap. Marie Gbagbi of Cote d’Ivoire qualified her country for a place after beating Sackitey Nadia of Ghana in a semifinal. Seham El Sawalhy won the 1st place after a close win over Marie Gbagbi in the final.

Meanwhile, an opening ceremony was held to celebrate the tournament. WTF Secretary General Jin Suk Yang awarded plaques of appreciation to Gen. Ahmed Fouly, a WTF Vice President and President of the African Taekwondo Union, and Mr. Hussam Kamal Morsy, President of the Egyptian Taekwondo Federation. A special appreciation was also extended to Mr. Amr Khairy, former world champion of Egypt, former national technical director and coach of the Egyptian national team. The second day of the qualification tournament on Jan. 12 will feature another four weight divisions to determine the remaining eight tickets.