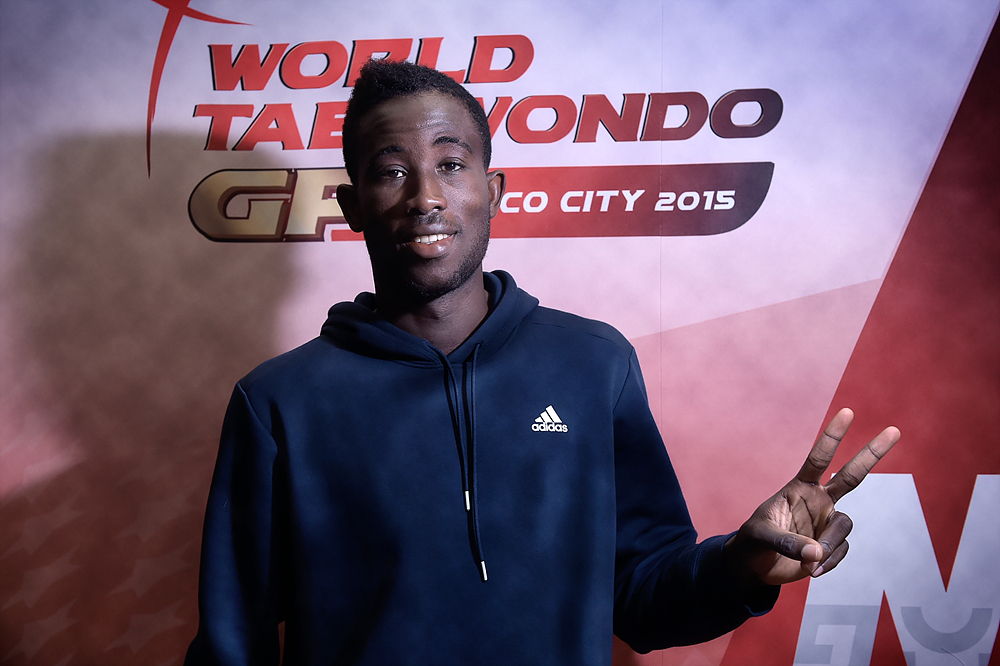 Cheick Sallah Cisse: ‘I am Not Afraid of Anybody’

It promised to be an epic clash – perhaps the best match-up of the 2015 World Taekwondo Grand Prix Final in Mexico City, Mexico on December 5-6.

In the men’s -80kg category, Cote d’Ivoire’s Cheick Sallah Cisse is one of the most consistent fighters in the sport and the pride of African taekwondo.  Moldova’s Aaron Cook is perhaps the sport’s most crowd-pleasing fighter, noted for his all-out attacks and his use of spectacular kicks.

The two had done battle four times previously. Each had walked away with two victories. In Mexico City, at the season’s grand finale, the crowd anticipated an epic battle. They would not be disappointed.

Cook is a 100-percent offensive fighter – so from the opening bell, Cisse preempted his opponent by charging forward into an attack of his own. Many taekwondo matches are tactical, stand-off contests with athletes foot-fencing at distance, with the result being decided by one or two points. This was the opposite.

The crowd gaped, open-mouthed: The two athletes were defying the city’s notorious, energy-sapping altitude. All-out combat raged, as the fighters met head-to-head, bringing to bear every weapon in the taekwondo arsenal.

It ended 16-10 to the Moldovan. The agony of defeat was evident as Cisse, exhausted and devastated, dropped face down onto the mats. Cook dropped down beside him, putting his arm around his shoulders in an effort to console him. It was a powerful moment: The brotherhood of athletes.

Cook went on to win silver at the championship; his team admitted that their entire strategy for the competition had been based upon defeating Cisse.

Cisse, despite having been eliminated in his opening match, earned a place for his NOC to Rio on ranking points.

Later on the same day, he had recovered. Asked what it had felt like out there, he said simply, “I came for gold. I was disappointed.” In a fight post mortem, he admitted his offensive strategy had been undermined by Cook’s footwork. “I stated very strong but Aaron was cancelling me by moving around,” he said. “I should have changed my game.”

On the conditioning front, he had also been undone by the altitude, having had just three days of training. “I had not expected it,” he admitted. “It affected me a lot.”

Born in the town of Bouake, but now resident in Cote d’Ivoire’s capital of Abaijan, Cisse, 22, started martial arts with karate at the age of 5. When he moved to the capital at age 8, he switched styles to taekwondo. The rest is history.

He lists his three major competitive achievements as a gold medal at the Moscow Grand Prix Series 1, gold at the Brazzaville African Games 2015, and silver at the 2015 World Universiade in Gwangju, Korea. A consistent fighter, he has also medaled at the Samsun, Turkey and Manchester, UK, Grand Prix events.

Asked to list his key strengths he puts spirit at top. “I am not afraid of anyone,” he said. As regards physical attributes, he said, “I have the prototypical physique of the new style: good flexibility and good height.”

Cote d’Ivoire is one of Africa’s – and the world’s – strongest taekwondo nations.  The country was, back in 1985, the number two nation for the sport after Korea, something Cisse’s coach, Attada Tadjou, attributes to Patrice Remark, the country’s former technical director and current U.S. coach. It was this competitive success that made the sport so popular.

Yet despite the popularity of the sport in Cote d’Ivoire, Cisse admits that being a taekwondo athlete is a struggle.

“I receive a lot of media attention as I am doing well, but in terms of financial support, though I get support to go to competitions, it is tough financially.” He especially cites the support that the Cote d’Ivoire Taekwondo Federation President Bambacheick Daniel has personally extended to him. And he hopes for better things next year. “Now that I am qualified for the Olympics, I expect to get more support.”

An electrical engineering major, Cisse has currently suspended his studies to prepare for the Olympics. After Mexico City, his first step on the road to Rio is recuperation.

“I am going to rest as I had to give a lot of fights this year – too many,” he said. Indeed, many athletes comment on 2015’s grueling competitive schedule: After the May World Championships, the four-series Grand Prix took place in the year’s second half.

Cisse faced a particularly diabolical schedule in September. After winning the African Games title in Brazzaville, the Republic of the Congo, which ended on September 19, he jumped on a flight to Samsun, Turkey, to fight in the Grand Prix Series 2. He made it through to the final – also on September 19. There, he fought through to the finals, but after stalking on to the mats to face Iran’s Mahdi “The Terminator” he declared – to the astonishment of the crowd – “No mas.”

“What happened was, I was coming from African Games. I travelled and just weighed in and fought,” he recalled. “I was too tired and I had too many bruises to fight Khodabakhshi. I was in the final – but I stopped.”

After resting following a torrid 2015, the next step for Cisse is analysis. “We are going to analyze everything that happened, then make assessments, then plan, then go back to do some fighting,’” said Cisse’s coach, Attada Tadjou.

Cisse himself said he has no concerns. “I am not worried, I have a chance,” he said. “When I came here, my strategy did not work, but I have plenty of time to make some adjustments.”

As far as Cisse’s own analysis goes, he is respectful about his potential competitors in Rio. “Aaron Cook’s game is different to other people’s, he uses a dynamic style, not just in profile with the front leg,” he said. “I like his game – he did not change. He is a good fighter.”

Regarding Iran’s Mahdi Khodabashkhi, he said, “He is very good: I have never fought him … (but) he is not dangerous to me.”

As for Russia’s Albert Gaun, he said, “I beat him by 12 points in the Moscow Grand Prix, but he is good as well – he has his flavor.”

And what of Cisse himself? “He loves training – anytime, anywhere – and he has a winning spirit,” said Tadjou. “Sometimes he wants to do his own thing, but is very coachable – he is a dream for a coach.”