MUJU, Korea (June 25, 2017) – Taekwondowon, the venue for the 2017 World Taekwondo Championships, calls itself the home of the sport, and hometown athletes reinforced that boast by delivering the first two golds of the competition.

Silvers went to Vietnam and Iran, while bronzes were won by Colombia, Thailand – twice – and Italy.

In the first semi-final, hometown favorite Jae-Young Sim took on Colombia’s Andrea Ramirez Vargas. The first round went 2-1 to Kim, after a duel of mid-level round kicks from both fighters. In the second, Sim raised her game, varying her attack and scoring to the head while the Colombian girl tried, but failed, to land her spinning back kick. The round ended 11-2 to Sim. In the third, Sim had the full measure of her opponent and won the match with a convincing 16-9 victory over Ramirez Vargas, to the delight of the local crowd.

In the second semi-final, Napaporn Charanawat of Thailand went up against Vietnam’s Thi Kim Tuyen Truong. From the opening bell, both fighters were virtually mirroring each other, mixing round kicks and ax kicks, then working up-close, fighting to make kicking range. Despite the work rate, Round 1 ended scoreless. The second ended with a 2-1 lead for the Vietnamese fighter – all the points coming from penalties. Truong finally found her range in the third, extending her lead to 9-1 after the Thai fell and after she landed a pair of head kicks. The Thai got back into the fight with an ax kick, taking the score to 6-9 then 7-9. As the clock counted down, the match got torrid, both players tumbling to the ground in the clinch. In the last four seconds the score rose to 8-9, but Truong clung on to her lead for the win. 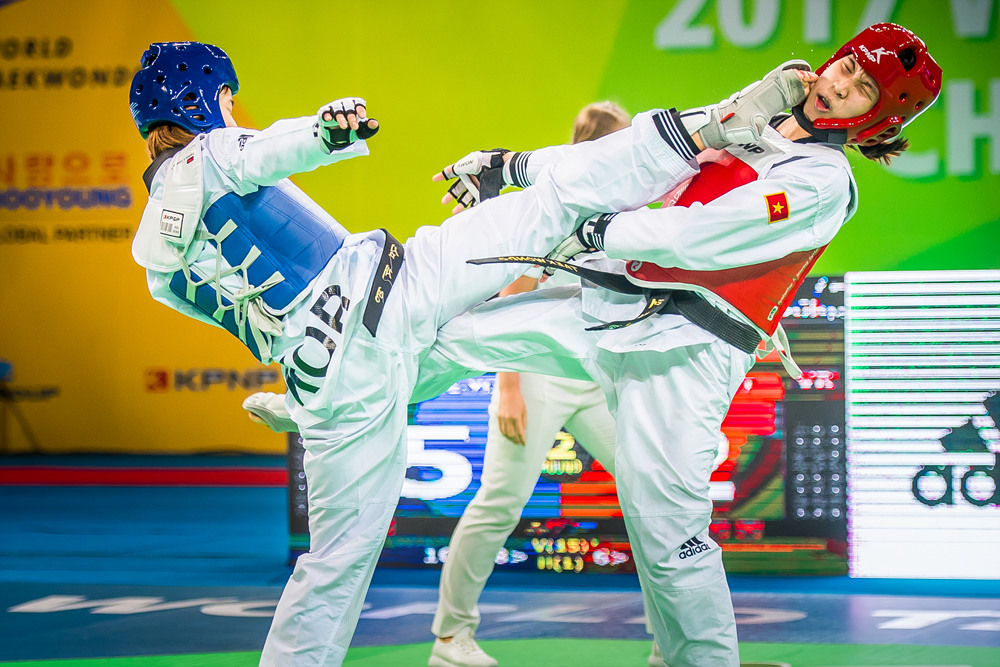 The final pitted Korea’s Sim against Vietnam’s Truong. First blood went to Kim, who forced Truong out of the area for a one-point lead – which was soon extended with another penalty, 2-0. In a very mobile fight – with Kim showing off some superb lateral footwork on the perimeter – the score rose to 3-1, Truong’s point coming from a punch. In the second, the tempo slowed; the referee ordered both players to engage. The pace rose as the round counted down. Kim looked unlucky for her ax kick to the face not to score, but she still extended her lead to 6-2. In the final round, Truong was penalized again, going 8-2 down, then her punch gave her another point. Kim landed an impossible twisting kick to the head – the technique of the evening – then another head kick, even though the Thai forced her out of the ring twice. It ended 18-9 to Sim, whose tactics, footwork and conditioning delivered a well-deserved gold. 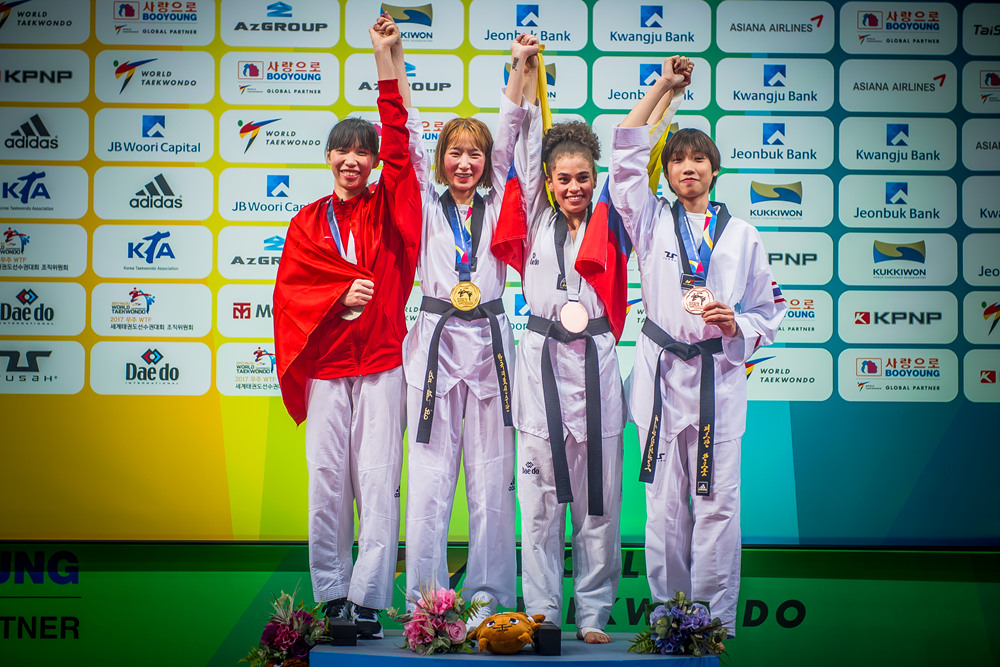 The first semi-final matched Italy’s Vito Dell’Aquila against hometown lad Tae-hun Kim, the defending world champion. The fight stared fast, both fighters unleashing barrages of round kicks, Kim firing ambidextrously, Dell’Aquila favoring his front leg. Kim, dominating center ring, forced the shorter Italian off the mats for the first point; the Italian was deducted another point for firing serial flick kicks. Kim’s forceful pressure tactics and better aimed body kicks raised his score to 7-0 by round’s end. The second continued with Kim using footwork and dual-leg kicks, while the Italian relied upon his front leg. The second ended 15-0 to Kim, whose arsenal and tactics the Italian had no apparent answer to. In the third, despite vocal support from the Italian team, Dell’Aquila failed to land and the match ended 16-0 to Kim after the Italian amassed 10 penalty points – indicating possible unfamiliarity with the new rules implemented since the start of 2017.

The second semi-final encounter was sensational: Iran’s Armin Hadipour Seighalani versus Thailand’s Ramnarong Sawekwiharee. Both fighters started fast, both used the full area, both fired head and spinning kicks and both landed, the points rising too fast to call. The Iranian was more accurate; the Thai more aggressive. Round 1 ended 8-4 to Seighalani. In the second, the Iranian’s cobra-like front leg was doing sterling work, lifting the board to 13-7. The Thai returned fire with a spinning back kick and a serial round kick attack. With the board at 15-15, the Iranian forced the Thai off the mats – but Sawekwiharee still managed to score with a back kick. The round ended 18-16 to Sawekwiharee. In the third, the Iranian was doing the chasing, but the Thai was landing, taking his score to 21-16 while backpedaling around the mats. The Iranian won two penalties points, to go 18-21. In a show of remarkable coolness and professionalism, with just 20 seconds remaining, Seighalani dragged the score up to 20-21, the 22-22 – then went ahead. It ended 25-23: A masterly from-behind performance by the Iranian. 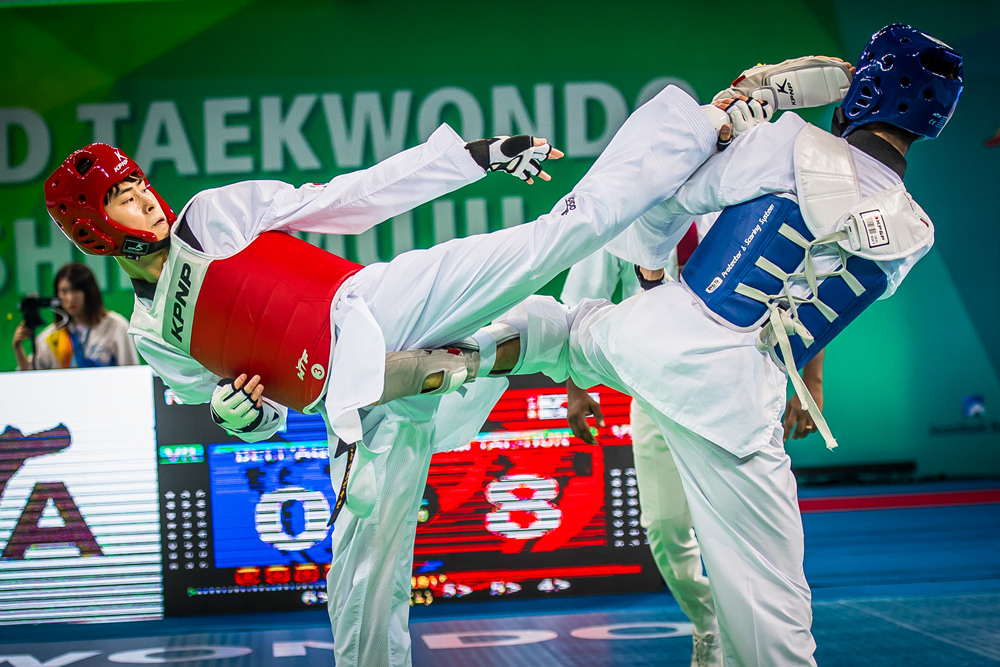 The final, with Kim, ranked 6th against Seighalani, ranked 4th – promised fireworks: Both lads showcase very different styles, Kim with his dual-legged kicks and smart footwork versus the sniper-like front foot and tactical smarts of the Iranian. The Iranian struck first, two points with a cutting kick to the trunk. Kim got one point back, then was dropped by Seighalani’s side kick. In the last seconds, Kim struck back to the body, ending the round 3-3. In the second, the score rose to 4-4, the Iranian landing the kicks but being forced off the mats by the Korean. Kim sneaked a superb round kick to the Iranian’s face – and suddenly Seighalani was in trouble. The second ended 9-4 to Kim. Round three saw a high work rate, with both kicking and pushing, Kim forcing the smaller Iranian back. A penalty took the score 10-5 to Kim. The Iranian launched a last-minute charge, with serial attacks and spinning kicks, but it was too late: the defending champion kept his crown and took home another gold, 10-6. 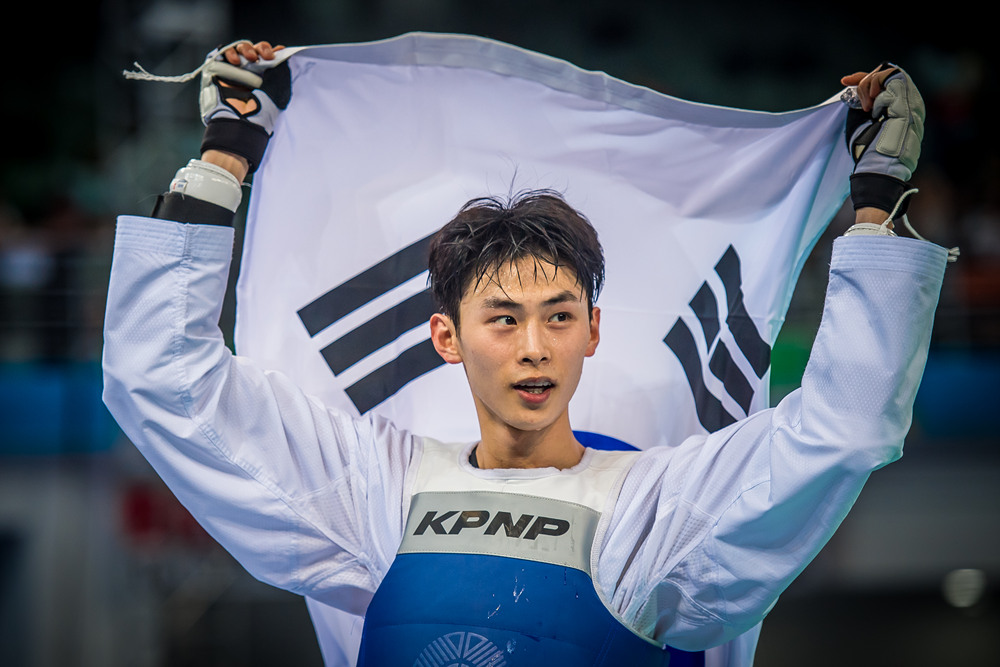 Seighalani won a deserved silver, while Sawekwiharee and Dell’Aquila had to be satisfied with bronzes.

The 2017 World Taekwondo Championships are the 23rd edition of the tournament, which runs every two years. With 183+1 nations participating, the 2017 championships are the largest ever, and are taking place at the world’s largest taekwondo-dedicated training facility in Muju, in Korea’s southwest. 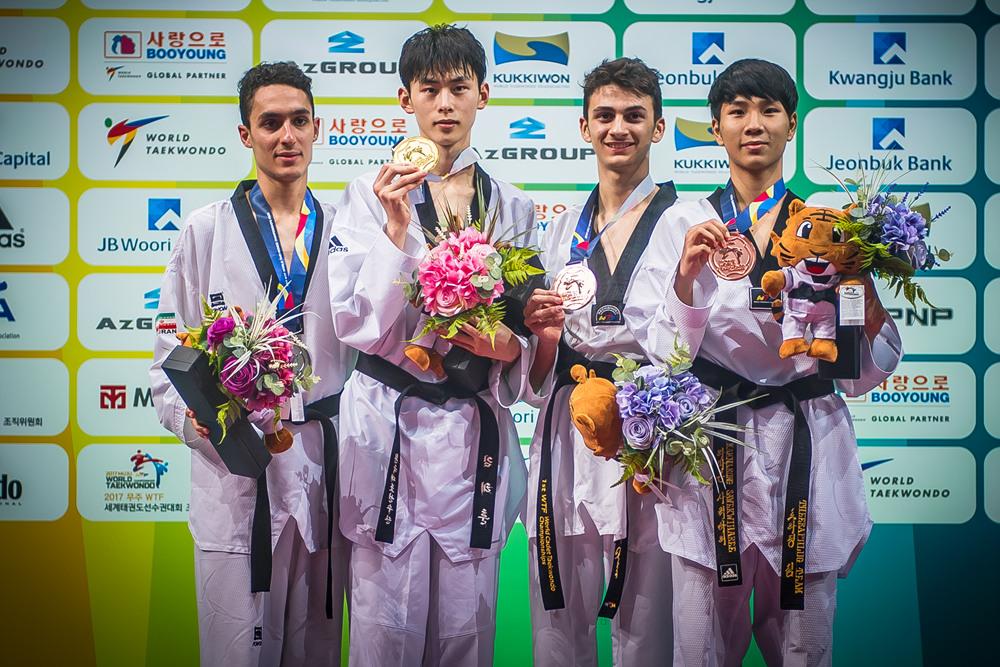