After two days of high-octane, high- altitude competition at the 2015 World Taekwondo Grand Prix final in Mexico City, Mexico on Dec. 5-6, 2015, the sport’s top 48 taekwondo athletes, hailing from 26 different countries, had won quota places for the 2016 Rio Summer Olympic Games.
Eight Olympic weight categories, four male and four female, were contested on Dec. 5-6, 2015. Two gold medals were won by both China and Korea, while Egypt, France, Great Britain and Iran won one gold each, Besides their medals, the gold medalists each took home US$6,000 in prize money and a local gift: A Mexican sombrero.
At the Sala de Armas – the Olympic fencing venue in the Magdalena Mixihuca Sports Complex – the fitness of the fighters was tested by Mexico City’s altitude. And given the Olympic slots that were at stake, fighting was particularly fierce, for only the leading six out of eight fighters in each category would win their NOC a berth in Rio.

The French girl had the height advantage, but Wu is possibly the most dominant female fighter in taekwondo. Aziez seized the first point before Wu equalized in a flurry then scored another to end the first round 2-1.

In the second, Wu extended her lead to 4-1. Her perfectly calibrated kicks are so fast, flicky and well-timed it is sometimes difficult to see how she scores, while her timing is so good she seems to be a step ahead of her opponents. In the third, Wu, fighting with perfect composure landed a punch, raising her score to 5-1, then 6-1. Aziez came back in the dying seconds, taking the board to 4-6, but it was a convincing win for Wu.

Thailand’s Panipak Wongpattanakit beat Mexico’s Itzel Manjarrez 3-2 for the bronze.
In the female -49kg category,China’s Jingyu Wu, Croatia’s Lucija Zaninovic, France’s Yasmina Aziez, Thailand’s Panipak Wongpattanakit, Brazil’s Iris Tang Sing and Korea’s So-hui Kim won quota places for Rio.
There was everything to fight for in the highly competitive male -80kg category, as the world’s number one, Mahdi “The Terminator” Khodabakhshi, was sidelined with an ankle injury sustained at the Manchester Grand Prix Series 3 – leaving Moldova’s Aaron Cook to do battle with Great Britain’s Lutalo Muhammad for the gold.

It was a match with historic ramifications, for British Olympic selectors’ decision to choose Muhammad over Cook for the London 2012 Games had prompted Cook to depart Team GB.
Cook, the crowd favorite, got down to business landing a body kick against the much taller Muhammad for a point but Muhammad scored back with a classic Cook-style technique – a jump spinning round kick – for 3 points that astonished his opponent.
In the second, the Briton slowed his pace. Cook attacked and attacked, but could not penetrate Muhammad’s tight, back-weighted defense. Cook fell, then lost another point as Muhammad’s stabbing side kick slammed into his midsection. The second ended 5-1 to Muhammad. In the third, Cook won another point but visited the mat again. Cook attacked, but Muhammad jammed Cook’s spins, denying him a high-scoring kick. With Cook tumbling yet again, the match ended 7-3. Muhammad looked exultant; Cook fell to his knees in tears.

In the female -67kg category final, France’s Haby Niare took on Turkey’s Nur Tatar. Niare was already through to Rio on ranking points, but fought in Mexico for the sheer joy of the sport. Despite some fierce flurries, the kicks were not registering, and the first round ended 0-0. So did the second. The French girl had been looking more relaxed, powerful and active and finally won a single point. In the last 10 seconds, Tatar launched an all-out assault, but Niare held her at bay, winning the gold, 1-0. Sporting a huge grin, she danced across the mat in a spontaneous exhibition of delight.

China’s Hua Zhang beat Russia’s Anastasia Baryshnikova 4-1 for bronze.
In the category, France’s Haby Niare, Sweden’s Elin Johansson, Chinese Taipei’s Chia Chia Chuang, Korea’s Hye-ri Oh, Russia’s Anastasia Baryshnikova and Turkey’s Nur Tatar won Rio quota places.
In the male -58kg category, Iran’s Farzan “The Tsunami” Ashourzadeh Fallah battled Korea’s Tae-hun Kim. The match started with cagey front foot fencing, as both boys tried to find the range, but with the Iranian looking lighter and faster. The round ended without a score. In the second, Kim tried to drop the ax, while the Iranian returned fire with tactical cutting kicks. Again, the round ended score-free. Ashourzadeh Fallah finally took a one-point lead after Kim earned his second penalty – then, in the last three seconds, Kim connected with a round kick to the head for three points and the gold.

In the final match of the female -57kg category, Egypt’s Hedaya Malak took on Spain’s Eva Calvo Gomez. Malak displayed an elastic front leg, and both girls played a long-range, front-leg game, but despite a high work rate, Round 1 ended scoreless. In the second, Malak raised her kick rate and moved forward aggressively; Calvo Gomez attempted to counter off the Egyptian’s attacks. Yet neither girl found the range. In the third, both girls tried spin back kicks; neither connected. With the score 0-0, the match went to golden point. In the last 11 seconds, Malak raised her leg and dropped a precise-looking ax kick to Calvo Gomez’s face. It did not register. The Egyptian coach appealed. After a tense few seconds, the appeal was granted, giving Malak gold and Calvo Gomez silver. 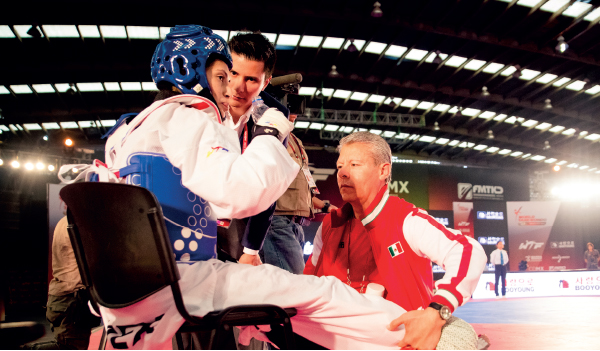 The finals of the male +80kg category pitted France’s M’Bar N’Diaye against Iran’s Sajjad Mardani. Both men started off playing side-on, defensive games, trying to fake each other into making a mistake. The cagey strategies left the scoreboard empty at the end of the first. In the second, Mardani tried a pair of powerful rear-leg turning kicks and scored to the body. In return, the Frenchman got flamboyant, trying to land arcing ax kicks and a reverse turning kick, but the round ended 1-0 to the Iranian. Seconds into the third, with both men spinning in a close-range exchange, N’Diaye clouted Mardani in the head with his elbow. The Iranian collapsed to the mats, and was removed for medical attention. N’Diaye was disqualified – leaving him with silver and Mardani with gold.

In the final of the female +67kg, Mexico’s Maria Espinoza – a huge favorite with the vocal local crowd – went into battle against China’s Shuyin Zheng. Espinoza was giving away almost a head in height difference to Zheng, but looked unintimidated, dancing around the Chinese girl, trying to distract her with hand fakes. Zheng tried to keep Espinoza at distance with flicking kicks and Round 1 ended 0-0. After a series of Mexican waves through the crowd, the second got underway with Zheng firing head shots, but failing to connect. Things heated up as Espinoza closed the range and landed her trademark punch, bringing the crowd to their feet. The round ended 1-0 to Espinoza. In the third, the Mexican tried to get inside Zheng’s long legs to clinch, while firing a few conservative kicks of her own. As the last 30 seconds counted down, the audience went ballistic – then Zheng appeared to connect with a spinning back kick to the face. She jumped with delight, but it went to the video review jury. The points were granted, putting Zheng in the lead. As the final seconds counted down, a desperate Espinoza uncorked a series of reverse turning kicks, but to no avail; the match ended 4-1 to the Chinese girl.

For the bronze, the Netherlands’ Reshmie Oogink beat the USA’s Jackie Galloway 4-1, despite a last-second appeal by Galloway’s coach for a head kick.
Athletes who won Olympic quota places in the category were China’s Shuyin Zheng, Serbia’s Milica Mandic, Great Britain’s Bianca Walkden, France’s Gwladys Epangue and Mexico’s Maria Espinoza.
In the final of the male -68kg, Mexico’s Saul Gutierrez faced off for gold against Korea’s Dae-hoon Lee. In this match, it was the Mexican fighter who was the taller, but it was Lee who put the pressure on, attacking forward with a stabbing side kick, varied with turning and oblique kicks. Lee went one up, then two, then three with separate body kicks. Round 1 ended 3-0 to Lee with Gutierrez looking frustrated. In the second, the Mexican started using his height to his advantage, connecting with a head kick for three points, evening the score and delighting the crowd. With both fighters raising their work rate, the board went to 4-4. A head kick appeal won Gutierrez a further three points, ending the second round 7-5 to the local lad. Round three started with Lee looking dangerous as he tried to force the Mexican off the mats. Gutierrez was dropped to the deck and Lee closed the gap to a one-point difference – then scored again, evening the board to 7-7 at the end of the third. Lee looked fresher as the two fighters came out for the golden point. Lee was the first to connect with a body kick, earning golden point and gold medal.

Thus ended the Grand Prix series for 2015. After a year that has been mentally stressful – due to the build-up to Rio – and physically grueling – it featured a range of Opens, as well as the Worlds and then the Grand Prix series jammed into the second half – for the athletes, things ended with an appropriate pressure release. A post-tournament party provided a chance for everyone to let their hair down in a downtown Mexico City nightclub. Many of the athletes who danced the night away will next meet on Rio’s mats.